Stepping off the train from Budapest in Vienna had me cross another invisible line – unexpected but obvious: Germanic efficiency! Every metro station seemed to gleam, each train arriving within seconds of its schedule. I wandered behind my Austrian friend who had met me at the station, agape at the sheer precision of it all. After so long catching “the next one” – be it bus, train, or other, I could now look up a schedule and have it reliably kept-to. We wandered through the warm Viennese afternoon – my friend gazing with familiar eyes, me still disbelieving at actually being ‘in Europe’.

I spent that night and the next at my friend’s house in a little village about thirty minutes west of Vienna. Breakfast was a gratuitous spread of Austrian food: cold cuts, spreads, good bread – all things I had sorely missed in Asia (though, ironically, I was also starting to miss all the fantastic food of Asia).

My friend lives mercifully close to the Wachau wine region of Austria, a tiny-yet-famous area of white wine production. Although only 3% of wine Austria’s wine industry, it’s one of the oldest and most prestigious areas. Most notably, the Grüner Veltliner and Riesling grape varieties grow excellently and produce correspondingly excellent wine. It turned out I had timed my arrival in Austria spectacularly: every year, generally for just a few weeks, Austrian cellars around the country throw open their doors to serve Heuriger – “this year’s”. Most everything served is from ‘this year’, with excellent cold cuts and young wines. Each winery has a wreath made of twigs and pine with a lightbulb in the centre hanging out by the road, and when the light is on, so is Heuriger.

My friend and I cruised along the river-roads of the Danube, searching for that yellow glow in the summer drizzle. They make the most of the land they’ve got in Wachau – as it runs along the Danube, the valley walls create a natural barrier, but the wineries really push it to the limit, with vines practically growing on grassy cliff faces. I don’t envy the grape-pickers here. Eventually we found a place with the surest sign of a good Heuriger: rustic wooden benches polished to a smooth sheen by the behinds of decades of revelers. We slapped down some Euros and went to town: 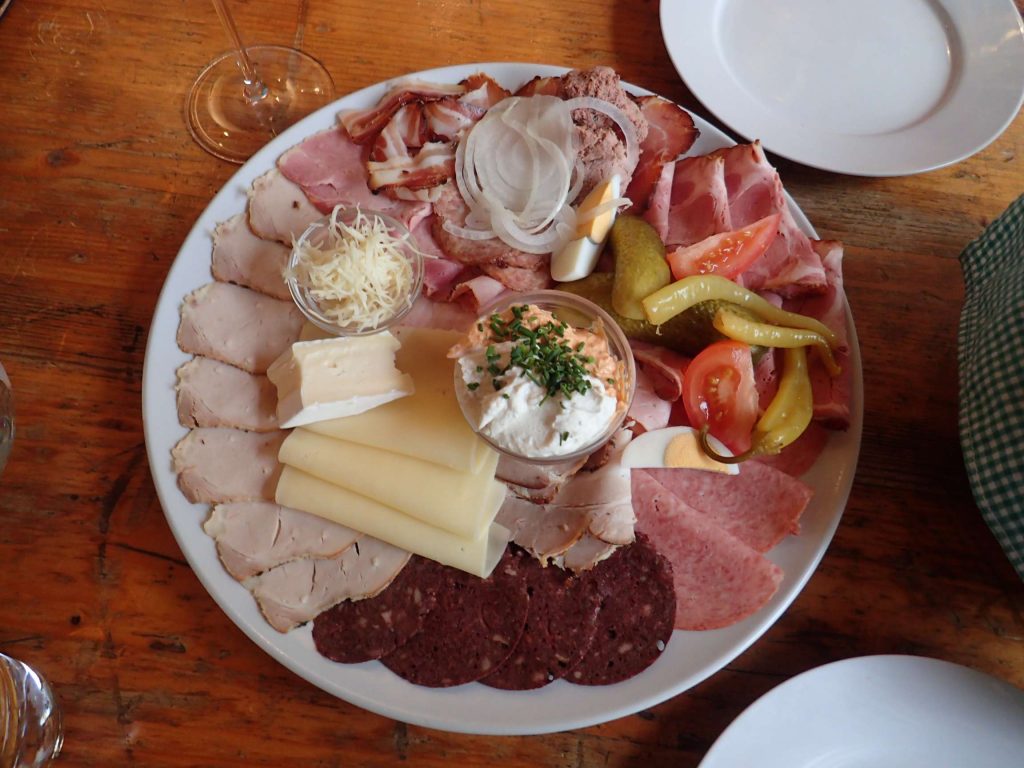 This was probably – no, definitely – the best thing I ate in Austria. A knock-your-socks-off Heuriger platter of cold cuts, cured meats, cheeses, spreads – the works. Clockwise, we’ve got hot-smoked bacon, chicken liver pate, something pork, something else, blutwurst (blood sausage – amazingly spiced), and a whole heap of cold sliced pork loin. On top you’ve got Swiss, Brie, horseradish, and a couple of spreads.

The wine was pretty good, too.

It was surreal to finally be in a country in which I could speak the language – after several months and many countries of signing, pointing, and shrugging, I could now at least chat to people in bars and on the street. I could understand both the drinking songs and the slurred argument between the unhappily married couple at the next table! I will admit that the Austrian accent caught me off-guard; I wasn’t in my element until Berlin with its ‘hochdeutsch’ (‘high German’). Naturally, though, everyone speaks perfect English – as soon as I made the slightest mistake in Deutsch they switched to English. Oh well.

Right near my friend’s place, it turns out there’s something slightly unexpected: a UNESCO World Heritage Site, the Abbey of Melk. The Benedictine abbey, currently a school, is almost 1,000 years old, and it’s hosted everyone from Austrian royalty to Napoleon Bonaparte to – somewhat more recently – Patrick Leigh Fermor. He called it the ‘roof’ of his walk through the region, and it does indeed sit on a large rocky mound. There’s a cleared section overlooking the Danube called ‘Napoleon’s Garden’ – but not the kind of garden you’d expect: he used the space to rain cannon fire down on enemy ship coming up the river. 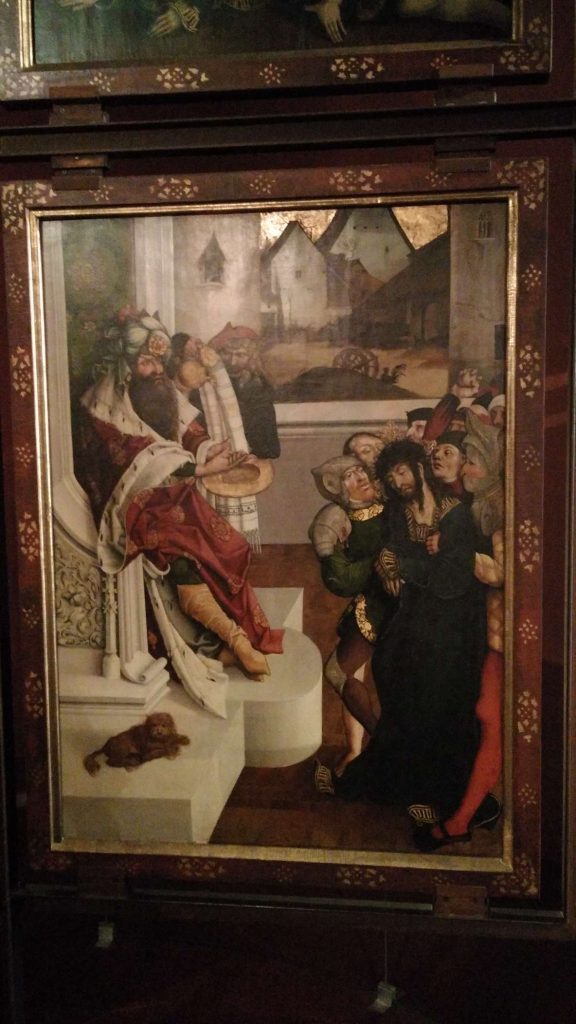 There were twelve of these paintings, all from a time period where the sermons were delivered in Latin, despite it only being spoken by the priests and the upper classes. Hence, paintings featuring unusually expressive faces were made to convey the general message of the priests. Fun fact: the king sentencing Jesus is depicted as Ottoman (despite not actually being Ottoman) because they were the oppressors-of-choice for that era; an easy figure for the masses to dislike. 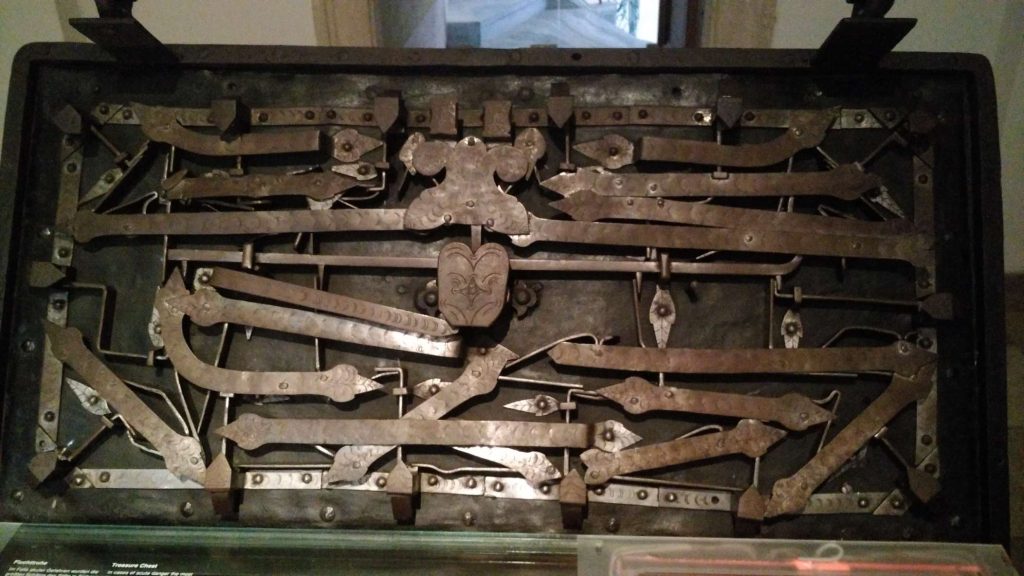 There was an actual treasure chest, too, featuring a ridiculously complex locking mechanism. When the heavy iron key – as large as a child’s forearm – was turned, all of the spokes and latches and blades moved in unison to pull back the latches. Impressive engineering, honestly. The whole place was unexpectedly grand for a ‘little town on the Danube’.

It turned out that both my friend and I had planned to travel to Prague on the same day, so we decided to book a bus together. If you’re in Europe and in need of relatively cheap transport, Flixbus is the way to go. They’re like the Uber/Ryanair hybrid of bus travel – and all on a German schedule. We arrived a few hours early in Vienna, and so ended up in the main street wandering into St Stephen’s cathedral. It’s an impressive structure, with intricate carvings and features – unmistakably gothic. The interior is best described as ‘cavernous’, but with interesting contrasts to yesterday’s abbey: far more austere, foreboding, grey – well, far more gothic. 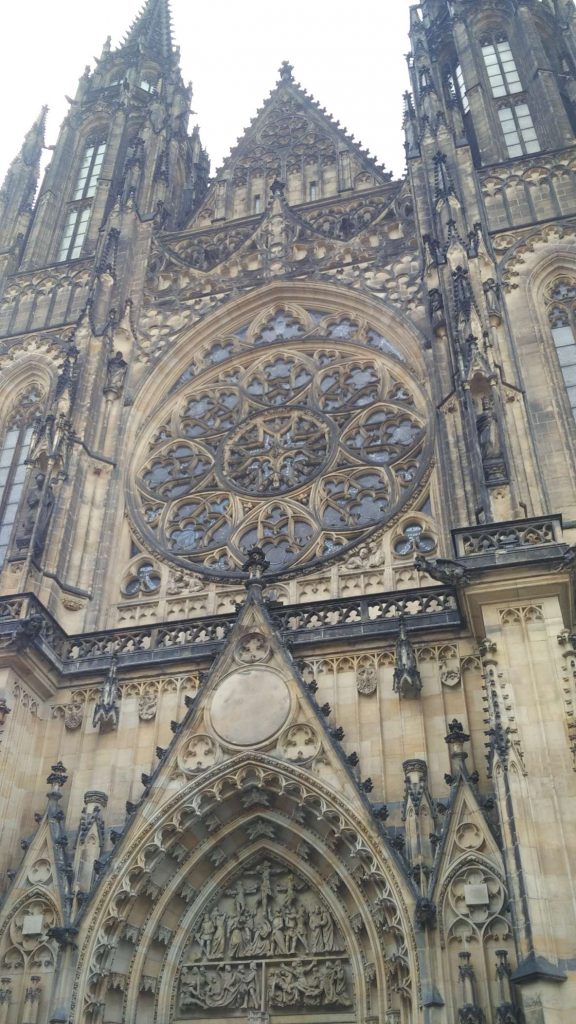 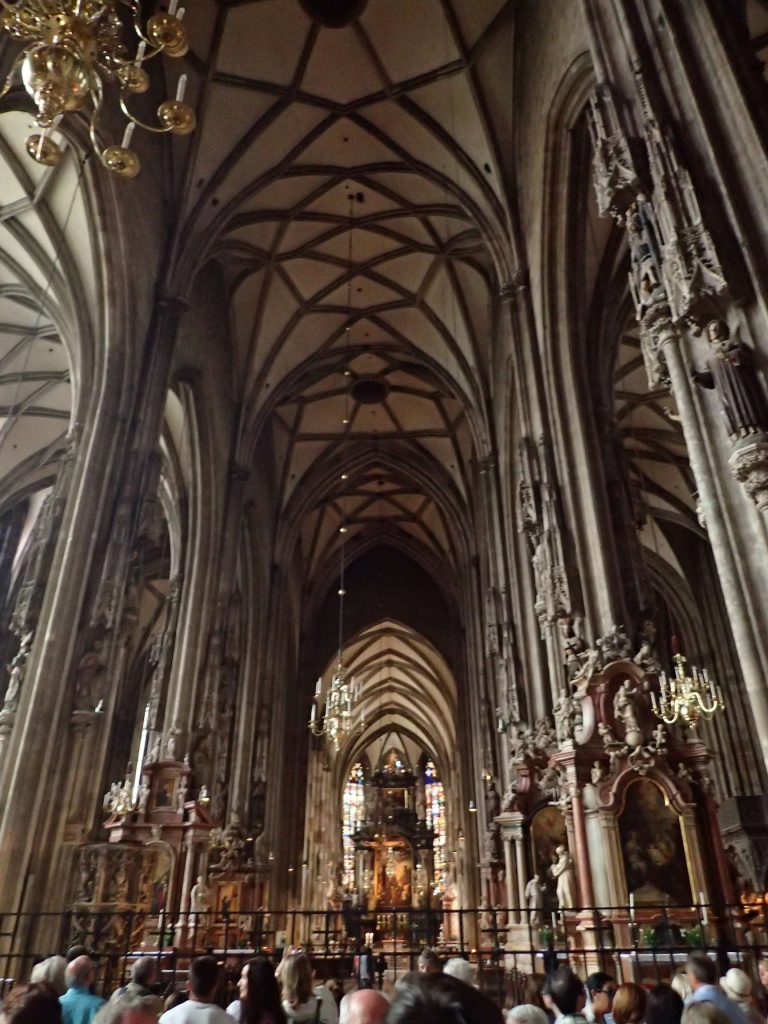 Back when I was camping in Hungary, the Austrian friend I’d originally met in Georgia wrote me a list of ‘must-see’ things in Vienna – invaluable, considering she lives there. One of her top recommendations was Aida, a chain of kitsch ‘old Vienna’ bakeries.

We then ate a burger, hopped on our bus, and were on our way to Prague.

[After a very busy few weeks with friends in Sweden, I’m now back home in Australia and finishing up the last few posts – the following ones will come much faster, promise!]

This entry was posted in Austria, Daily