The bus glided over another invisible line into the Czech Republic. This one was marked by a neon wasteland of ‘24/7 SHOP’ signs, glittering casinos and theme parks lining the highway. Tucked away behind the money-making monoliths were crumbling farmhouses and decrepit shops selling power tools and sex toys. I guess this is the hotspot for Austrians coming to blow off some steam, whether that’s by shopping, gambling, or something more private. Like in Budapest, the hostels in Prague were predictably jam-packed for the European summer. My friend and I had, in a rare move, booked ahead – albeit to one of the stranger hostels. This would turn out to be a fantastic decision, as the place had a great community atmosphere (the kind of thing you miss at the ‘chain’ hostels which occupy an entire building).

We pulled in to Prague central station to grey skies and drizzle. Having just driven through several hours of Eastern-Bloc architecture, it was a relief to be on the outskirts of the picturesque old town. We had an obstacle between us and the hostel, though: the subway. When you’re in a new city every few days, you get pretty good at navigating subways – and recognizing good and bad ones. Prague’s was definitely bottom three – maybe the worst in terms of usability (the best? Singapore, Beijing, Berlin). We had no Czech koruna, let alone coins (the only thing the ancient ticketing machines accepted), and the one miserable station attendant was being mobbed by about fifty people in a similar situation to us. My friend’s strategy in a situation like this would usually be to ride without a ticket – most of the time, they won’t bother sending the fine invoice from, say, Spain – but just one country over was another matter. We decided to ride without a ticket.

We walked through the gates, down the steps to the platform, rounded the corner and came face to face with a uniformed man checking tickets. Uh oh. We were both frozen in mid-step, thinking only of the 60 Euro fine, when we heard a sound behind us – a man in a hoodie had just rounded the corner, seen the ticketer, and sprinted back up the stairs! The ticketer gave a shout and chased after him. Thanks for the brave sacrifice, comrade. My friend and I grinned to each other and thanked our lucky stars as we speed-walked to the other end of the platform.

That night, practically the entire hostel (all twelve of us) headed out together, making the most of fifty cent beers and doing what was expected of us on a Friday night. I ended up in a multi-storey pub/club – the gimmick being each floor was down, rather than up; it was some sort of converted bunker or cellar. With each set of stairs the music got harder, the lights darker, the people drunker – the bottom floor wasn’t so much a themed room as it was an epileptic mosh pit. We retreated to the next floor up and took amusement watching several north Africans very obviously selling drugs – each with his own satchel of pills and baggies he would not-so-discreetly show to passers-by. We met some very friendly, very inebriated Germans whose names I only discovered upon reading my notebook the next morning: ‘Fabian’, ‘Florian’, and ‘Robert’, each name scrawled in a different drunk handwriting.

Strolling around Prague in a vain attempt to get rid of the hangover, it seemed like half of the planet had decided to spend summer here, drawn by cheap beer and disappointing weather. Throngs of people crowded the streets and the palace grounds, seemingly undeterred by the rain. As it grew heavier, I decided that was enough of daytime Prague for one day. 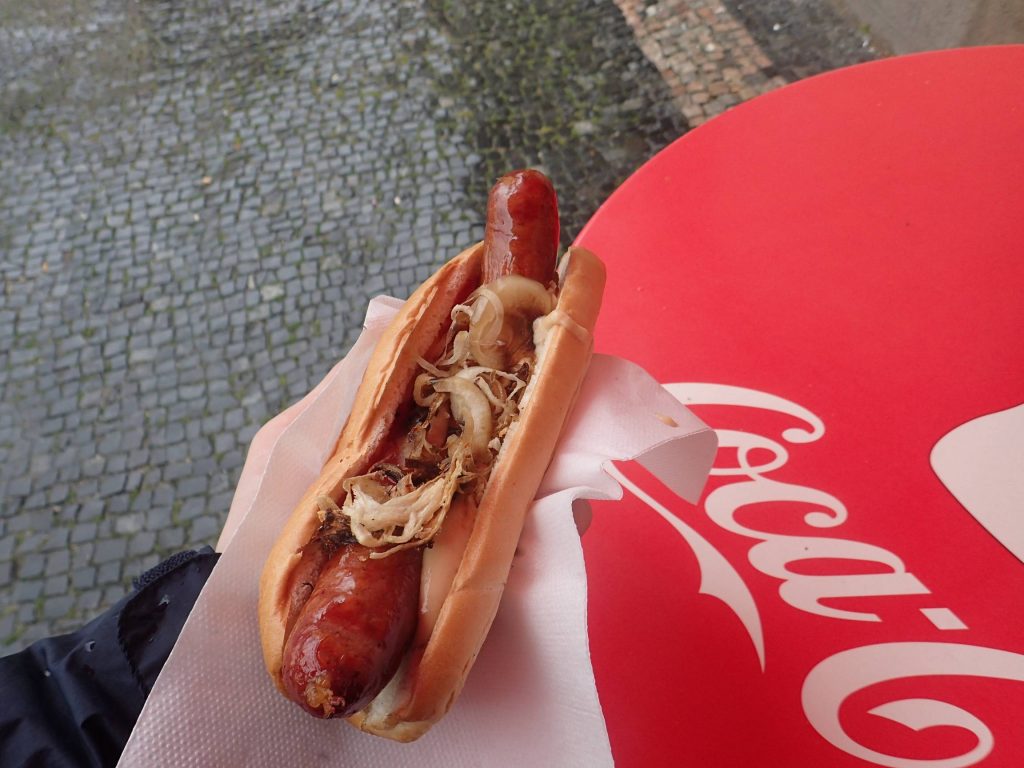 I went for dinner with my Austrian friend and couple of Swedes. We found a wonderful place tucked away in a cellar and split a ‘pork knee’ with horseradish puree and enormous potato ‘knudeln’ (dumplings) – again, much better than it sounds:

The Swedes took the liberty of schooling me in classic drinking songs/sayings such as ‘Helan Går’ (‘the whole goes down’) and ‘Int nu, men nu!’ The second one is both the title and the entire saying – it’s Finnish for “Not now, but now!” I would expect nothing less from the Finns.

The next morning I said goodbye to my Austrian friend and boarded another Flixbus to Berlin. This was one of the more traumatic bus-catching experiences I’d had – I couldn’t find any signage for where it was supposed to depart from, and was dashing all over the station as my watched ticked past the departure time. I found an equally frantic-looking German and we realized that the bus was just late… it was a connection all the way from Vienna to Berlin, so was held up by traffic. An hour later it pulled up. So much for German efficiency! (In their defence, they do notify you of delays if you provide a mobile number …which I did not)

Leaving the Czech republic (again through clusters of sex shops and casinos), I was reminded of an oft-debated point in hostel common rooms: Budapest or Prague? My verdict is this: I had a better time in Prague, but Budapest is definitely the nicer city – and how good of a time you have somewhere is just a function of your luck, your choices, and your personality. No big deal.

I arrived in Berlin by early evening, the East German architecture mostly confined to the less-modern outskirts. Incredibly fashionable graffiti lined most flat surfaces, and people of every culture, race, skin colour, subculture seemed to coexist harmoniously. Every street corner has a ‘späti’ (‘spät’ being the German word for ‘late’) where you can buy cheap beer and cigarettes 24/7, almost invariably staffed by a Turkish or Moroccan man, and there are more kebab shops than places selling German food. Speaking of food – I was shocked by the amount of ‘Asian fusion’ everywhere. Berliners apparently love their Thai/Viet/Chinese food! I get the feeling that this is Munich’s grungy brother – dirty, occasionally confronting, but dripping with life and culture.

The first people I saw on checking in to the hostel were three Sydneysiders with exceptionally large pupils who couldn’t seem to stop touching one another. They grinned at me as they walked out – it was, after all, Friday night in Berlin. I realized I had been drinking practically every night since leaving Turkey, so I decided to give it a rest and see the city at night sober. I strolled around the dark streets, occasionally passing a pulsing building with a line of people outside. I must have turned down the drug slingers outside these clubs fifty times; they should really think of a better way to sell – plus, everyone knows the best stuff is in the bathrooms (I actually just overheard some people say that (promise, mum)).

The next morning – well, afternoon; I was out late – I set about seeing Berlin. Tempelhofer Feld (field) is a particularly interesting place: it’s an abandoned airfield converted into a massive public space. You can cycle and rollerblade around the airstrips, areas have been set aside for barbecuing and miniature gardens, and what’s more, it’s the very same airfield used in the Berlin Airlift just after WWII. This picture doesn’t do it justice:

I also, by obligation as a tourist, visited the Brandenburger Tor and Reichstag: 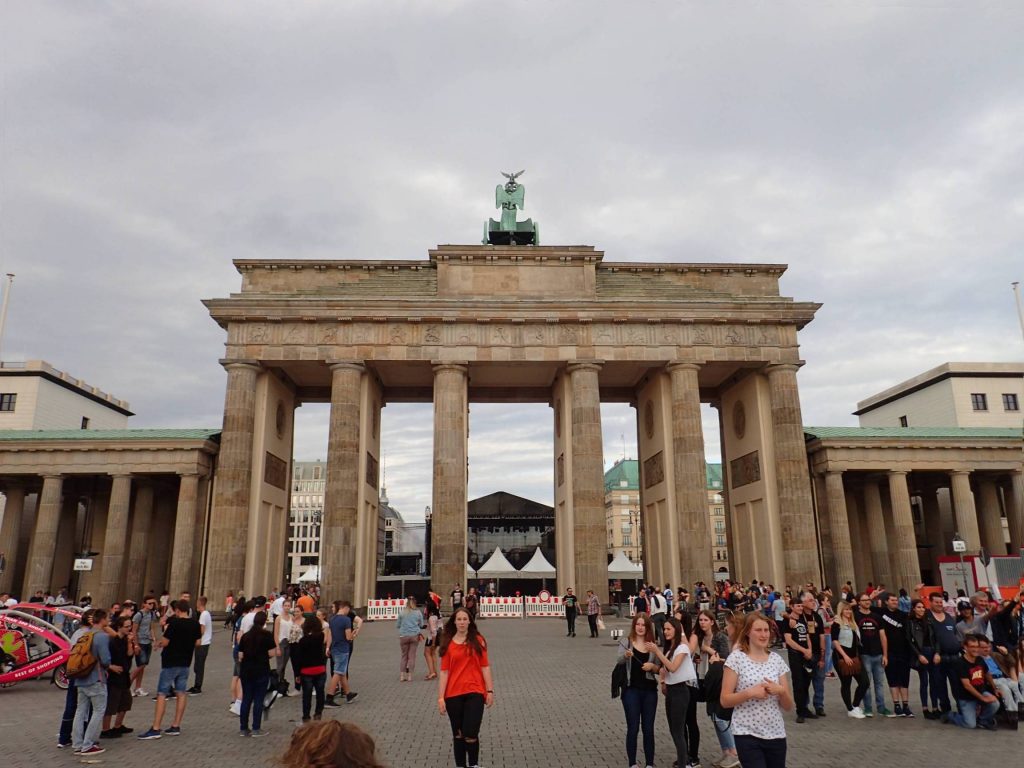 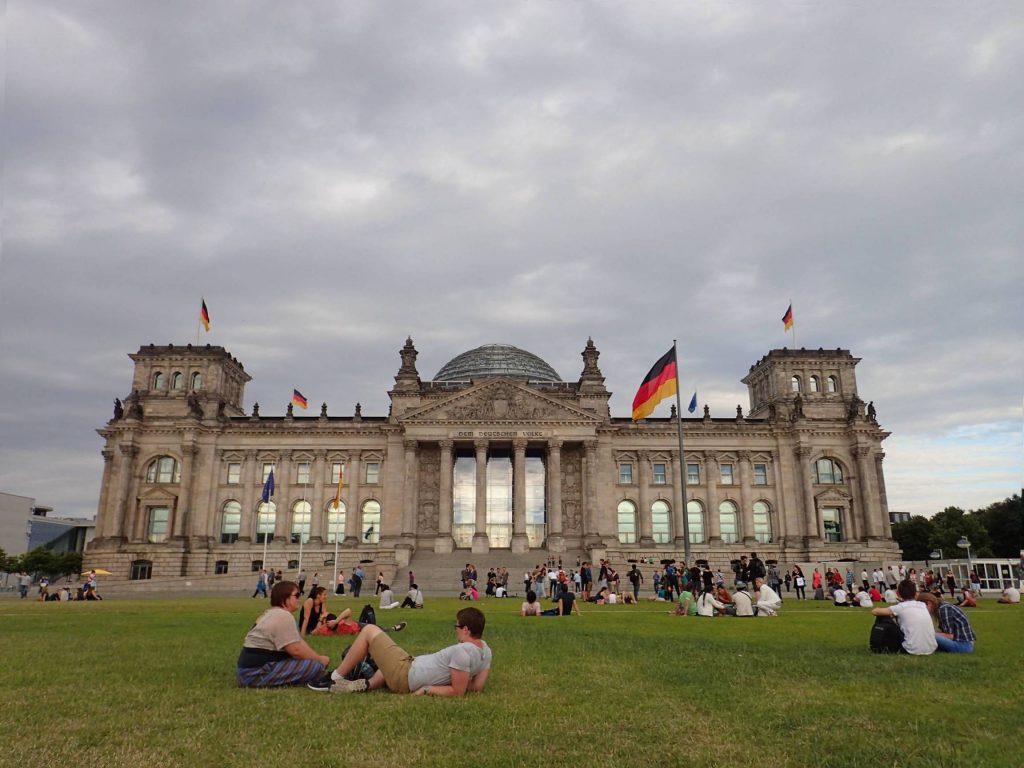 Every time I rode the ruthlessly efficient Berlin subway, I was reminded, oddly, of a time back in Australia: I was particularly fond of German electronic music for a while, in particular Paul Kalkbrenner (any Germans reading this will know him). He has one song in which he takes the ‘doors closing’ sound on the S-Bahn and samples it into an entire track. Every time the doors closed, I’d start humming the song to myself without realizing it. Here’s the song, if you’re interested.

That night, I had met a Texan guy – don’t worry, Austin, not Dallas – and we decided to try and make it to a ‘real Berlin club’. Our plans went awry when we walked past a pizzeria and I saw, of all people, Fabian. Yes, that same Fabian I had drunkenly met in Prague! We ended up getting two more pizzas and buying a bunch more beer (just 70 Euro cents each) before looking for a place to consume said beer. We were looking for a park to sit in when I noticed we were walking under some scaffolding… Several flights of scaffolding stairs and six stories later, we were on top of a construction site, where we stayed for the rest of the night. As we finally left, I snapped a picture of where we had been sitting – it, er, does look a bit grim… 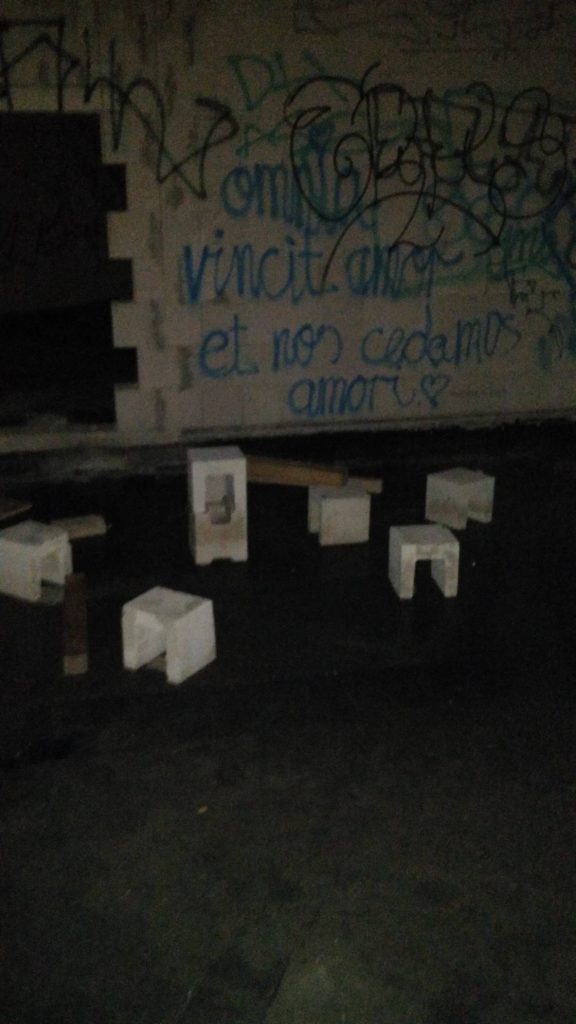 The next morning, with the now-familiar headache, I had just one thing in mind, the cure-all, the silver bullet to all afflictions: currywurst. I staggered out to the first place I could find:

The last place I made it to in Berlin was the Sunday flea market at Mauerpark, an enormous all-day thing full of junk sales, food places, designer and thrift shops, and (naturally) a karaoke arena. The idea is, there’s an MC with a mic, a laptop, and some speakers, and anyone can come up and belt out a song to the beaming crowd. I heard everything from a shaky ‘Bohemian Rhapsody’ to an Adele-level (or should that be Lionel-Richie-level?) ‘Hello’, but overall the atmosphere was fantastic.

Entirely cultured-out, I packed my bag once more and boarded the bus to my final destination:

This entry was posted in Czech Republic, Daily, Germany