I caught the Belgrade-Budapest train towards Hungary, getting off in a little town just past the border called Kiskunhalas. With an hour to kill before my next train, I did the logical thing and went looking for berries – I found plenty of wild cherries hanging off trees in parks all over the town. Nice and sweet, with a tart center. From Kiskunhalas I caught a connecting domestic train to Baja (pronounced ‘Baya’ – and, I promise you, substantially different from Baja, California), where I had planned to meet my Austrian friend. I had met her in Georgia, and she was now cycling from Istanbul to Vienna, so seeing as we were in a similar area we thought it would be cool to meet up. 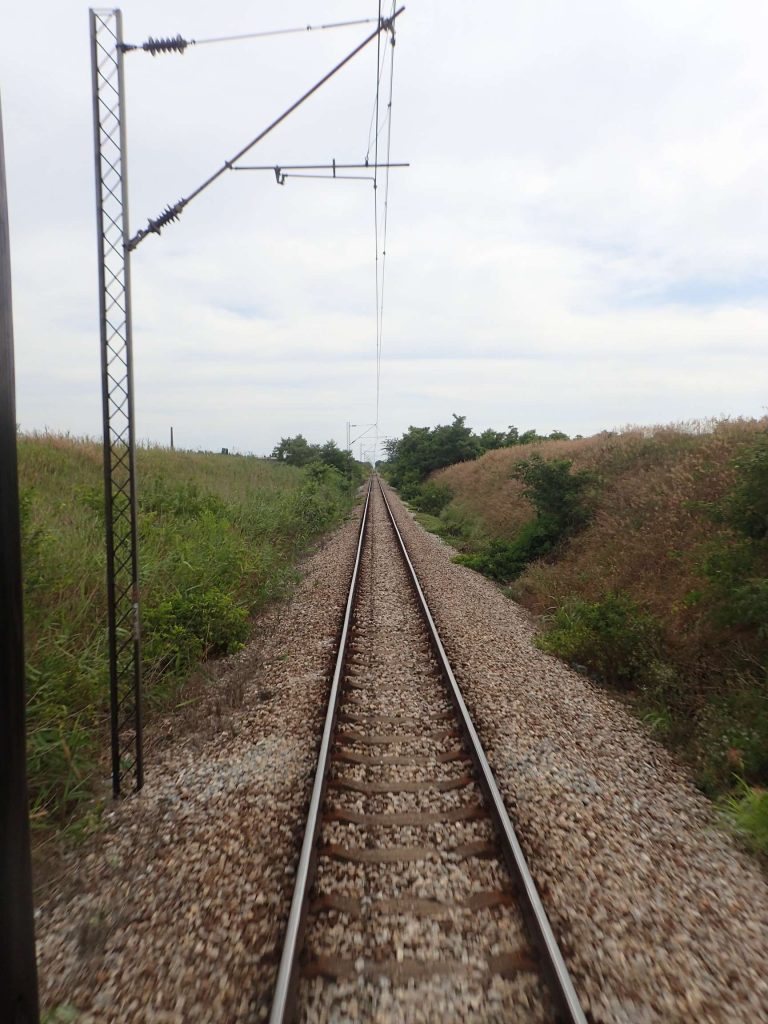 Baja is surprisingly charming, for a little Hungarian town with some 50,000 inhabitants. There’s an old quarter with cobblestones and rickety buildings, a friendly atmosphere, and a large island, courtesy of one of the tributaries of the Danube. The friendly atmosphere may also have been due to a large coincidence: the same days we were there was Baja’s annual fish stew festival – a dish it’s apparently famous for. The town had gone full-on-fairground, with carnival attractions, rides, and plenty of alcohol and fairground food. Everywhere were rows of wooden benches with a black pewter pot and a box of firewood on them; a friendly local told us they were all going to be lit tomorrow: everyone sits down at a table and makes their own fish stew.

My Austrian friend was carrying a tent, which she had pitched in a free campground on the bank of the Danube. It’s a sharp contrast to go from bustling cities to a quiet river bend – well, quiet except for the pumping fairground music and Slav karaoke carrying over the water. The trees and sunset sky reflected off the still water, disturbed only by a ripple from the odd fish. Weathered barges sat moored on the other bank, a few birds perched on their cabins singing mating songs. 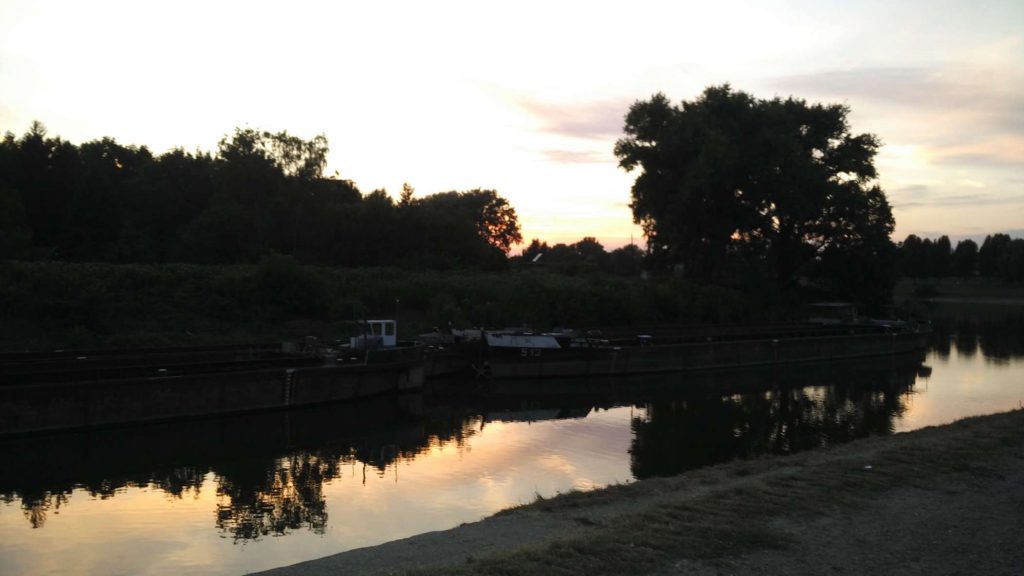 Along with vertigo-inducing rides and bumper cars, the festival featured a street about a kilometer long filled to the brim with food and drink vendors. Hungarian sweet treats, cherry pies, fresh doughnuts rolled in sugar, grilling meat, wine and cheese stalls – there seemed to be everything available.

One of the more unique desserts we found was basically fresh dough rolled into a long snake and then wrapped around a cylinder, rolled again to flatten and finally roasted over charcoal. I don’t know what it was called, only that it had far too many consonants – I couldn’t tell if the people in front of me were ordering one or coughing into their teeth. The end result has the amazing softness of freshly baked bread with a beautifully crusty, crunchy, golden-brown exterior. Of course, it’s also drenched in flavoured sugar (we chose cocoa). Excellent.

Given that my friend was cycling long distances daily with a heavy pack, she was perpetually exhausted – and I decided to give my liver a break, so we called it an early night. We found a bakery the next morning with excellent food, then I lost track of time and had to sprint back to the train station to catch my Budapest-bound ride. It had been good to see my friend again; especially surreal after meeting in Georgia and then being able to meet up again in Hungary. She’d had her fair share of adventures, from being invited to locals’ weddings to (almost) sleeping in waterparks (She also made it back home to Austria recently, congrats!). 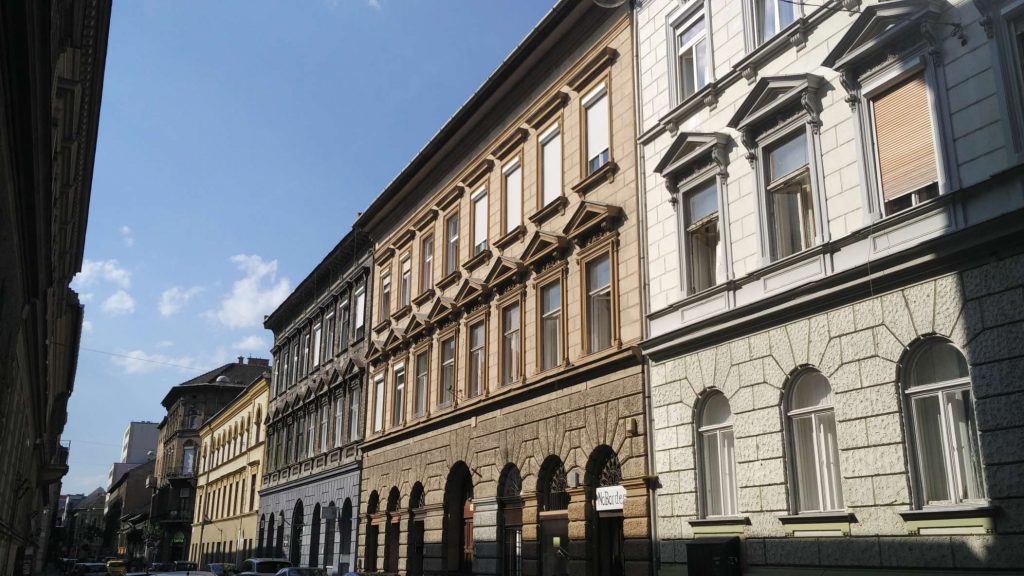 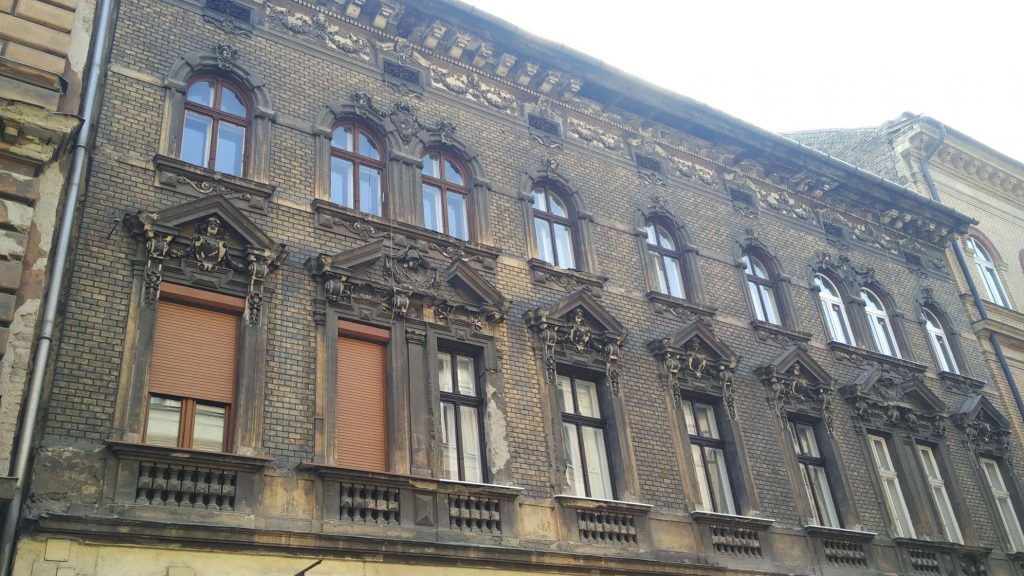 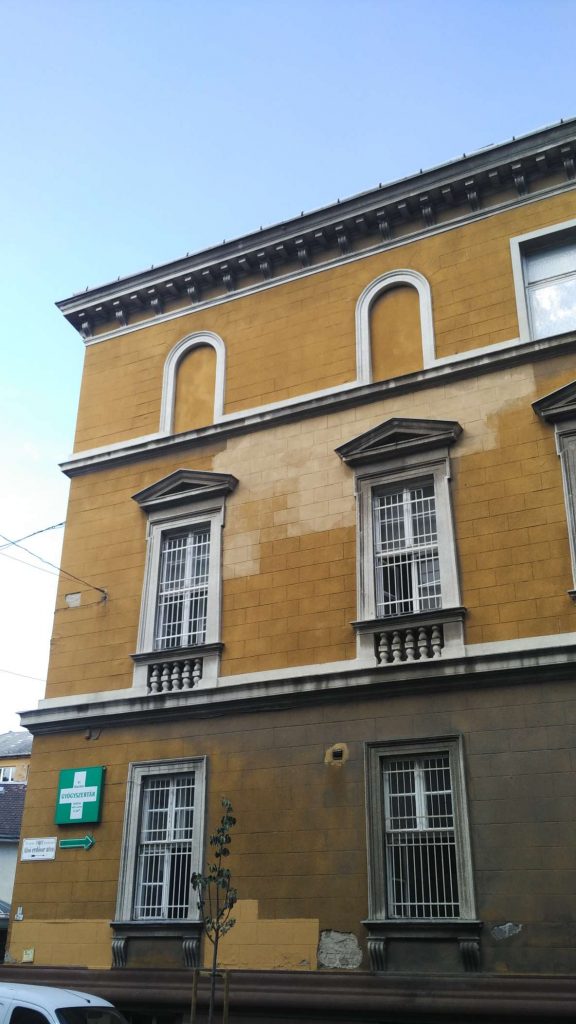 I don’t think I’ve felt as touristy on this trip as I did when I was taking pictures of ordinary buildings in Budapest, but screw it. I set about finding a hostel, a task that was for the first time surprisingly difficult. I had reached party central, it was Saturday night, and all of the enormous places I checked were full. Eventually, the sixth place had beds free. I headed straight back out to catch the sunset from the bridge.

I met some Finns and an American at the hostel and hit the town with them. Our first stop was – somewhat concerningly – a ‘concept shot bar’. You pay 1200 forints, about $5.5 AUD, and get a plank of artisan shots – yes, a plank. All sorts of plum, cherry, and peach liqueurs and vodkas made their way to our table accompanied by bread with a schmear of eggplant.

This place supposedly had five stars online, something which became more understandable as the evening went on. The planks were met with skepticism and raised eyebrows, but by the third glass we were quite indifferent. By the fifth we fully understood the online love for this place. An excellent business model: just get your customers really drunk! Next stop was one of Budapest’s famous ruin bars – a bombed-out building just maintained enough to allow a pub/club to operate inside. A rollicking good time with cheap beer and surreal surroundings, would highly recommend.

The night progressed, as they do, and I did something I’m not proud of. The morning after doing this thing, I wondered “Why am I so full?!” – then I checked my phone’s pictures… 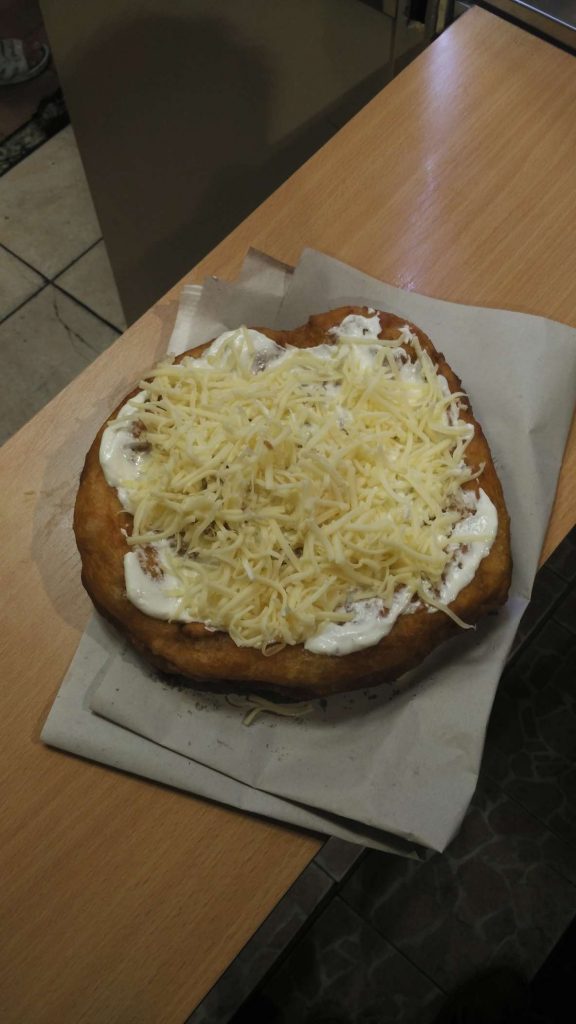 A giant fried frisbee of dough, smeared in sour cream and then piled with shredded cheese, unmelted, is shamelessly targeted at drunk people. It works, of course. It’s called langos, and it’s actually quite delicious. Pairs nicely with shame and a hangover.

The night was concluded by watching the sunrise from the green bridge with a bottle of wine bought from a 24/7 alcohol store – which are, by the way, truly the mark of a civilized country. 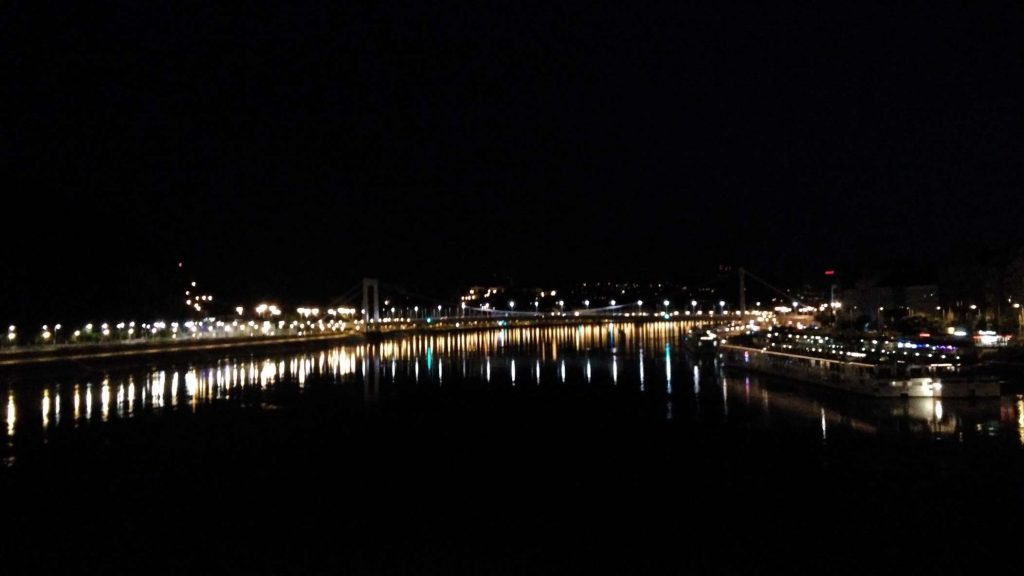 The next day was one of lazy sightseeing. I slowly climbed to the top of the hill, saw some views, some statues, the usual. 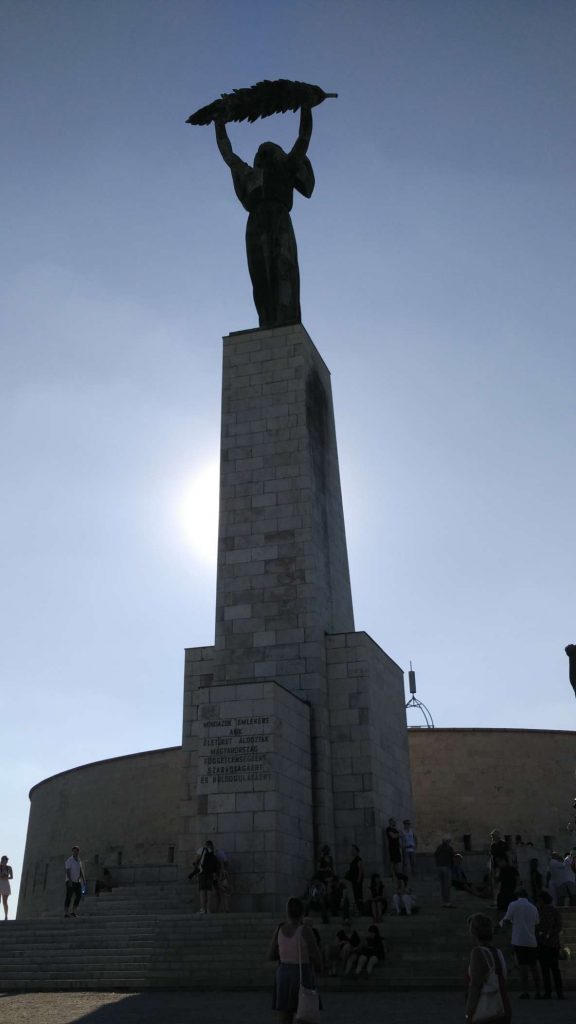 Usually when I’m in a country, I do my best to learn a few phrases, at the very least ‘hello’, ‘goodbye’, and ‘thank you’. It was getting harder and harder as my time-per-country was going down and down – but with Hungary I almost didn’t bother. Hungarian is uniquely cruel to the foreigner, full of strange sounds so different to its neighbours. It belongs to the same language family as Finnish, Turkish, and Japanese – you know, cultures that just intuitively belong together (they don’t).

I had an almost shamefully quiet night and was at the train station the following day to go see another friend in Austria.

This entry was posted in Daily, Hungary