Kabak – and Turkey in general – seems to consume time terrifyingly quickly. I had no set departure date from Kabak, but when the friends I had made said they were leaving after three nights I decided to follow. If I had stayed at Kabak much longer, I think my time there would have morphed into weeks. In true Kabak fashion, we had a noon swim and were out of the valley two hours later than planned. I was heading to Izmir, a seaside town often called the ‘California of Turkey’, a good 300km away from Fethiye.

First, though, food. The Turks I was with insisted I try kokoreç (‘kokoretch’) – a choice I very much agreed with post-meal. Pre-meal, however, kokoreç can seem unappealing: lamb intestines wrapped tightly around a torpedo of offal, including heart, stomach, fat, and sweetbreads. The whole structure is mounted on a large skewer and suspended horizontally over fire. To serve, pieces are sliced off and chopped and fried until crunchy, then placed inside olive-oil-slathered bread. Goes well with beer. I promise, it wasn’t as bad as it sounds – in fact, it was actually pretty damn good: crunchy, salty, chewy. What I’m not sure was so good was the drink of choice: Şalgam (shalgam). In a sentence, it’s fermented spicy black turnip juice. Definitely an… acquired taste. I can verify that it is actually spicy.

I hitchhiked with one of the girls I had met in Kabak, Cansu (‘Jansu’). She liked to take selfies, but was full of energy and super fun.

Our first ride was after about ten minutes: an ominously windowless white van with two guys in the front. One of them got out and threw open the sliding door to reveal hundreds of bootleg Adidas shirts, all neatly wrapped in plastic. We threw our bags in the back and Cansu was about to jump in when the guy laughed and beckoned us up to the cab instead. Suleyman was the more talkative one’s name: they were two knock-off shirt salesmen driving around the tourist beaches selling their goods. It was amazing just how much more comfortable the atmosphere in the cab was as a result of Cansu’s Turkish. People prefer when you can speak their language – who knew? At one point, Suleyman said he could get me to Greece in a rubber boat without a passport for just 1,000USD. Cansu scratched her head, “What was the word? Oh! Refugee!” I don’t think Suleyman was joking…

We got out at a truck stop somewhere when the guys were turning off our route. Once again I smelled gum trees as we stuck out our thumbs. Two students picked us up and took us about twenty minutes to a massive roundabout and much better hitching spot. From there we flagged down an ageing truck driver – Cansu was reluctant to hitch with any trucks, apparently they have a bad reputation, but this guy seemed friendly enough and we hadn’t got a ride for some fifteen minutes. Before long, Cansu was happily chatting away with Yilmaz about family life and growing up in Turkey.

Izmir was some way away by the time night fell, so I decided to reroute to Selçuk instead – a small town most known for its proximity to Efes (Ephesus), the ancient city. Cansu met her friend near where Yilmaz dropped us and was kind enough to drop me in Selçuk proper – he even tried to give me some money for accommodation, but I couldn’t allow that.

The next morning I headed to Ephesus, a short minivan ride away. The first thing you notice about Ephesus is the tourists. As was inevitable, I’ve reached European Tourist Territory. Accents, wildly varying fashion sensibilities, and that one cultural constant: the camera. Tourists aside, Ephesus is an amazing place; my experience affected only by the blistering heat. It’s hot enough that even the insects are silent, a breeze which is somehow hotter than the still air toying with the leaves on the baking trees. An impressively smooth marble road flanked by crumbling columns lines the promenade linking the theatre and the harbour. At its peak, Efes, as it’s known in Turkey/Turkish, housed 400,000. 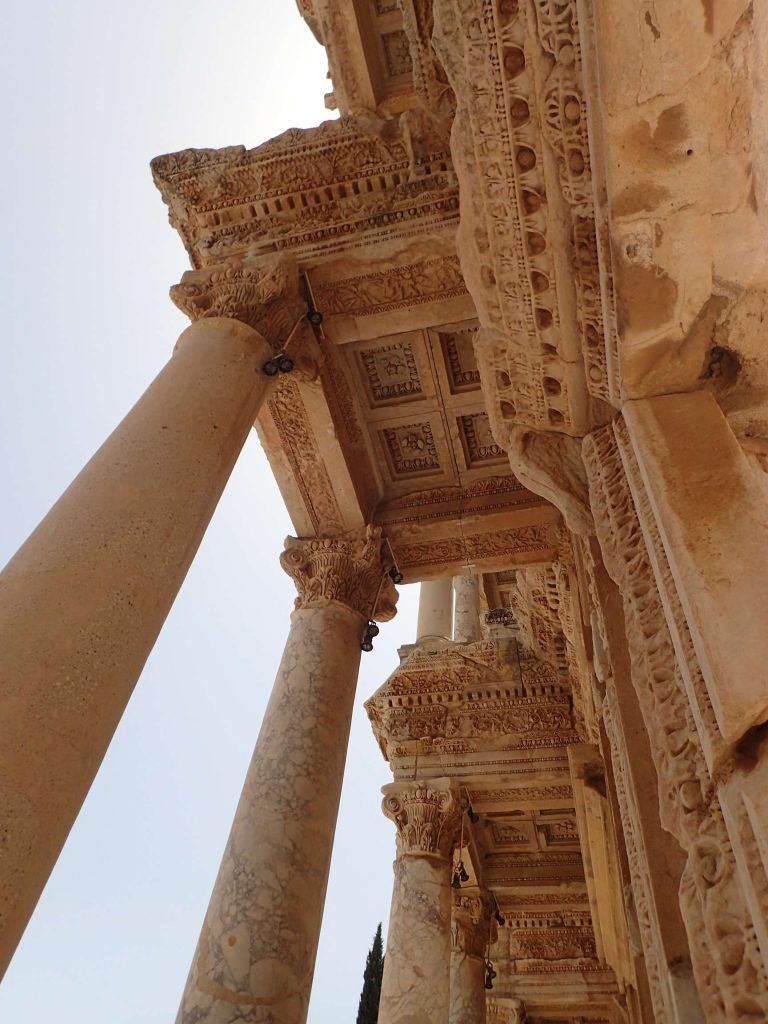 Ephesus is very impressive. Intricately carved pillars and façades are dotted around statues of gods and emperors and mosaics of great battles and crashing waves. It’s hard not to imagine streets teeming with Romans going about their business, shouts from the agora and gymnasium, clashes of steel as gladiators train, applause for comedians at the theatre. A fitting and well-preserved memory of the capital of Asia Minor. 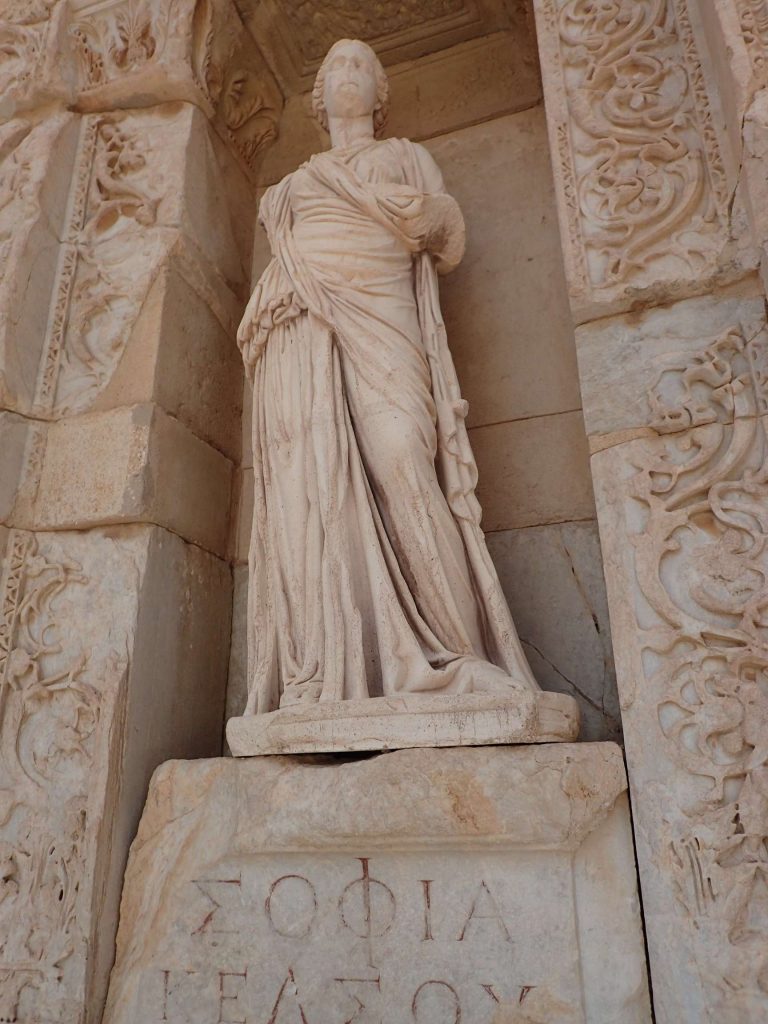 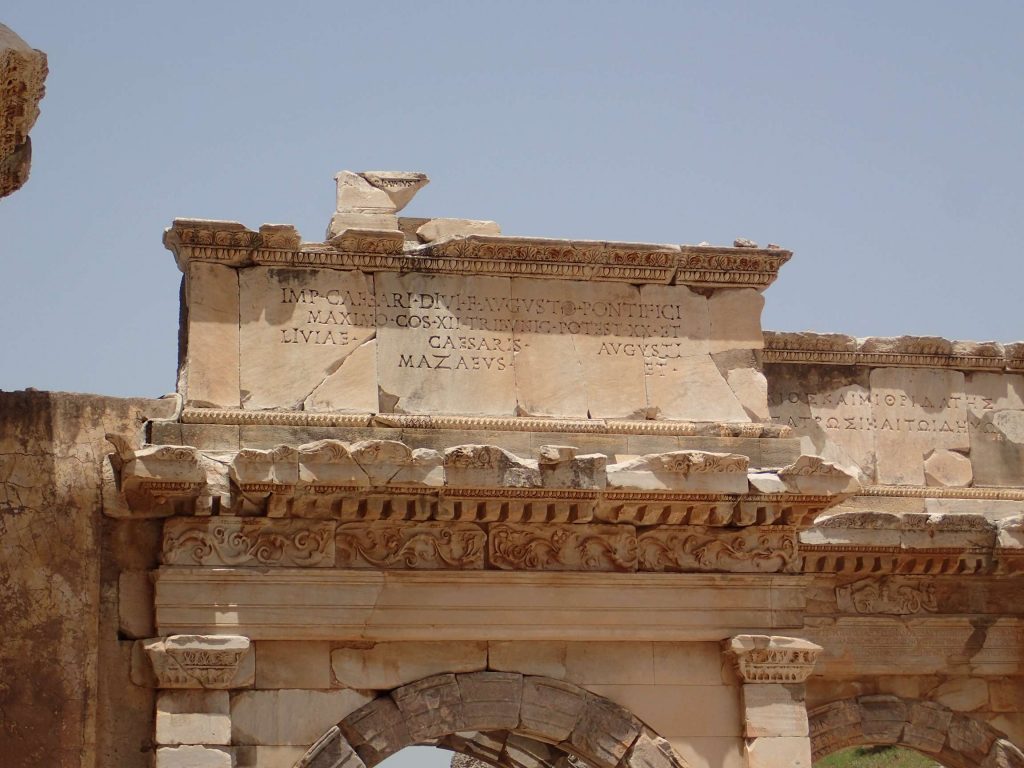 Ephesus has two entrances; I walked from the lower to the higher only to find that there were no minibuses shuttling the 4km back to Selçuk – and that I had lost my 40TL (20 AUD) entrance ticket inside. Refusing to sell my kidney and/or dignity for a taxi, I began the dusty stroll back to the village, hoping my sunscreen would hold up against the blazing midday sun. As luck would have it, after a few minutes I found myself walking a deserted path when the grass on either side fell away and I realised I was in an enormous orchard. The trees were heavy with plums, apricots, and peaches – many already rotting on the ground, overripe. I couldn’t resist taking a couple of plums that would have rotted or been pecked at before harvest anyway. And those apricots would only hang on for a few more hours… 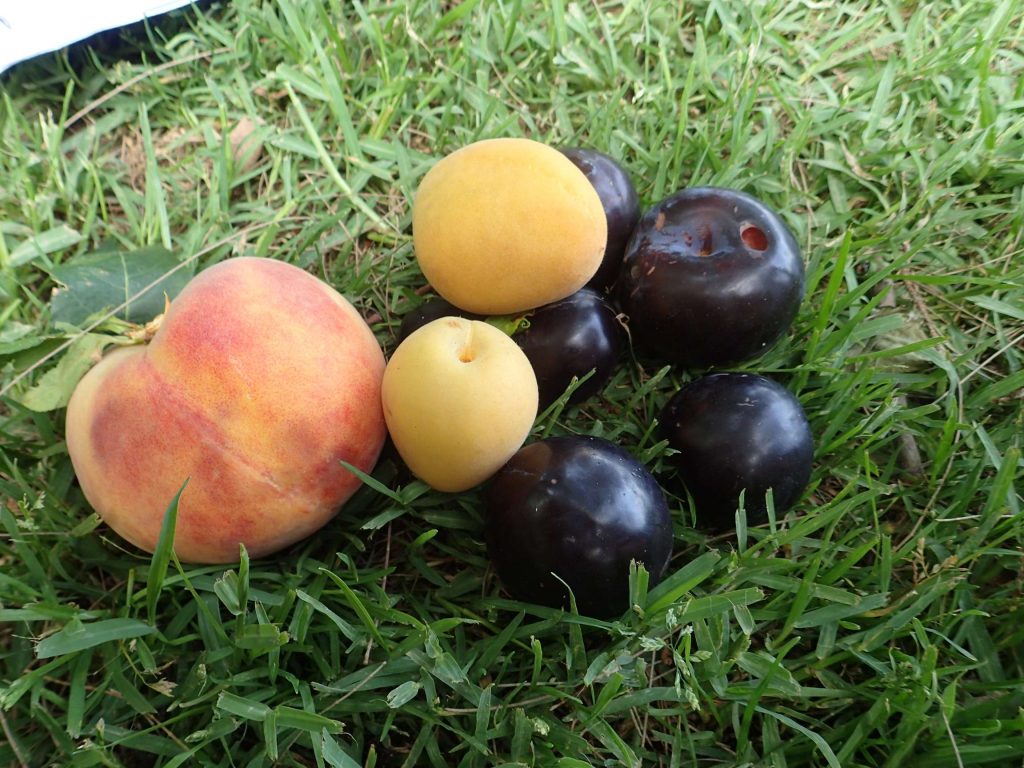 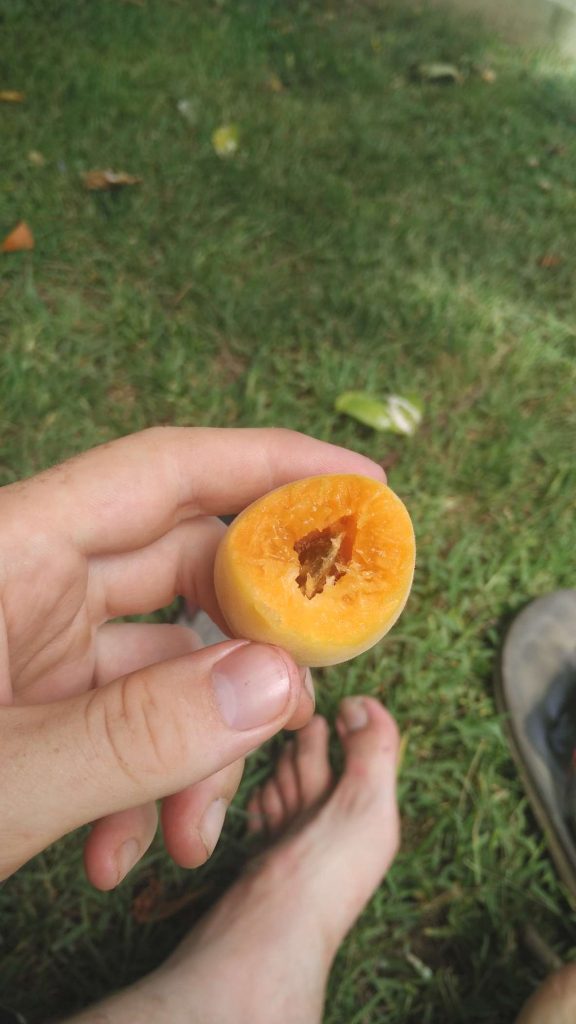 Few things compare to sun-ripened stone fruit almost falling off the tree: the snap of a plum’s skin and the trickle of purple-red juice which runs down your chin, or the jam-like texture of a golden apricot about to turn. This region is famous for its fruit – in particular fruit wine – and now I can see why. Stomach full and conscience… forcibly subdued by perfect fruit, I headed back into town. On return to my hostel and the sweet nectar of WiFi, my phone told me “39C. Feels like: 42.4”. Even for the height of summer back home, that’s hot.

I caught the dolmus (minibus) straight into Izmir, a short hour-long ride. Izmir is a pleasant city, with wide boulevards and sunny streets. Walking along the shorefront definitely reminded me of Venice Beach – though I think Izmir has fewer meth addicts. I met some guys at my hostel, a Dutch guy and a Lithuanian guy both studying in Istanbul, and we went for dinner. Adana kebab was the meal of choice – the first of many I would have in Turkey – minced lamb and beef well-spiced and gently placed around a skewer to cook over charcoal. It’s then wrapped in thin bread, lavash I believe, with some vegetables. Unlike the messy, saucy, exploding kebabs and yiros you find back in Australia, this was compact and easy to eat, not to mention delicious.

We grabbed a beer and watched the night’s game – some early stage of the Euros. This would later become much more of an obsession; I’ve since watched almost all the Euro 2016 games.

Next morning was a late bakery breakfast followed by exploring Izmir.

Lunch was enormous börek stuffed with white cheese, spinach, and a mincemeat mixture. Sort of like a loosely-packed sausage roll. 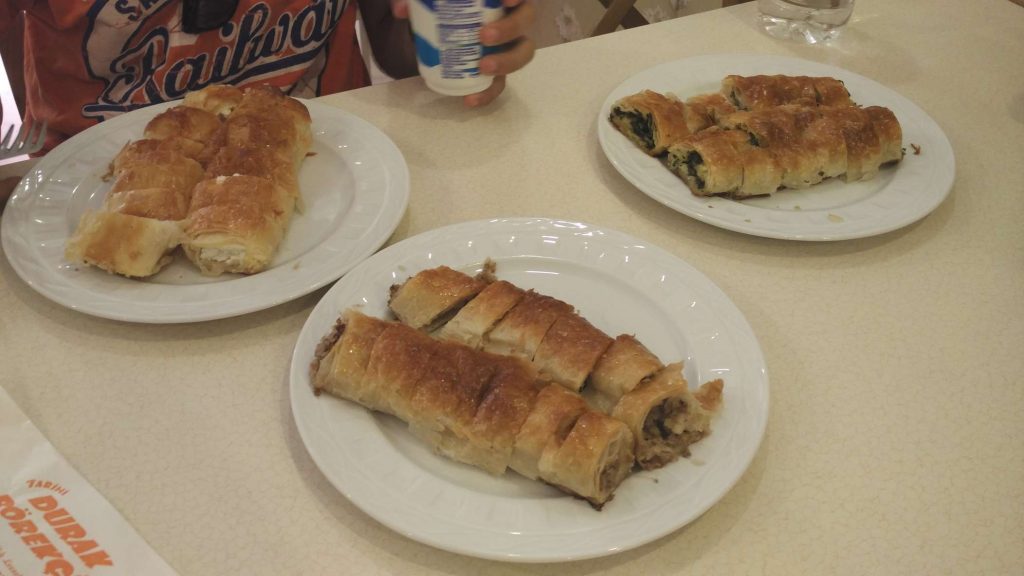 We got talking with the owner of the store – apparently it’s over 60 years old and has been manned by three generations of the same family. He gifted us some helva, a classic Turkish sweet. It’s made of semolina and sweet milk, seasoned with pine nuts. I can confirm that it’s excellent. 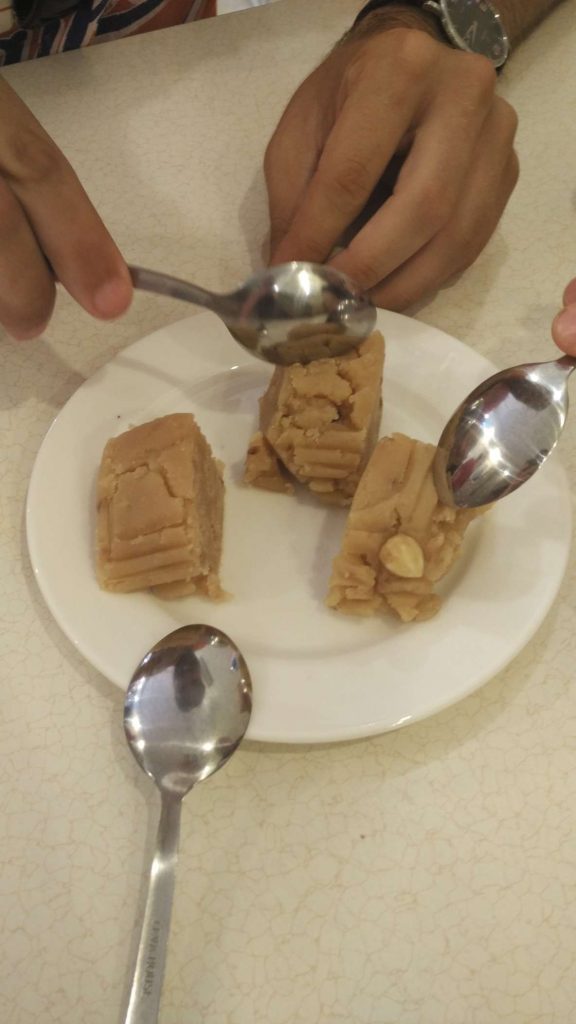 The next morning, as I was packing to leave Izmir, I realised with horror that I had lost both my Swiss Army Knife and my shoes. I still don’t know how I managed to lose my boots – I had been wearing my flip-flops, and can even remember looking at my bag, thinking it looked unusually small and empty. My boots, I think I left in Selçuk, and my Swiss Army Knife in Kabak. I’m still not quite over the loss of the boots – I was really attached to them! They had been with me for about three years – bought in New York, they had seen me through my entire year on exchange and the first two-thirds of my trip. Jungle, muddy Vietnam, sandy Mongolia, the clubs of Singapore – I was (and still am) weirdly sentimental about my boots. Ah well.

I tried not to think about it and made my way to the edge of town, where I quickly found a ride to Bursa. I met three Turkish students and hitch-hiked with them; we were picked up by two denim salesmen in a BMW who had developed a new method of dyeing denim. In Bursa, a large city across the bay from Istanbul (about four hours’ drive), I made it to my Couchsurfing hosts’ house – a newly married couple with two adorable cats. I had a great time with them; we talked about everything from Turkish politics to the Australian education system to video games. On one of the two nights I stayed with them we even watched the Warcraft movie. The next day I explored Bursa and its multi-domed mosque.

Bursa is a fine city, not particularly remarkable but not boring, either. My time there was made most memorable by my very hospitable hosts. Outside of that, though, the one thing Bursa is probably most famous for is actually a dish: iskender kebab. Iskender is famous throughout Turkey, and for good reason: it’s made up of long strips of lamb meat cut from a kebab, draped over a chunk of bread and smothered with savoury tomato sauce and browned butter. Oh yeah, you also get a dollop of sour cream and some grilled peppers. Heart attack on a plate maybe, but if you ask me, also one of the better ways to go.

I bought some baklava from an old lady selling it out of the back of her car and headed back to my hosts’ place, where they were kind enough to bring me to dinner with one of their parents. It was a fantastic experience – the father was barbecuing and the mother was preparing salad and chatting with some friends when we walked in. The father’s moustache reminded me of one of my uncles, and the whole atmosphere was friendly and welcoming. There was grilled chicken, köfte, roasted peppers, and an unbelievable eggplant puree. After dinner we went for a walk in the park – surprisingly busy for 10pm, everyone was celebrating iftar, the post-fasting feast. At some point during my stay, the husband taught me how to play backgammon – a surprisingly fun game – and we had a go reading each others’ fortunes, Turkish coffee style.

The next day I farewelled my hosts and new friends, wishing them luck in coming to Australia, and headed to the ferry terminal to catch my ride to Istanbul.