This post is for days 13/14/15. It’s currently day 18, but I haven’t been able to post – I underestimated the Great Firewall of China: Facebook, Google, Youtube, even Google Maps are blocked.  I didn’t prepare a VPN or even a proxy, so I wasted a few hours in the hostel finding one. Ended up using ExpressVPN and Freegate proxy (you only need one).

After meeting up with George, my old flatmate, in Hanoi for a night, I did indeed wake up with a hangover. Thankfully I hadn’t missed by 9am bus to Nanning, from where I would then get the overnight train to Kunming followed by the bus to Dali. At least I have music/books…

As we were headed to the bus stop (or so I thought), my moto taxi driver cheerfully informed me in broken English that he lived in the countryside and so didn’t know his way around Hanoi. The tiny pink helmet he gave me (missing the chinstrap, of course) was jammed on my head. Does the placebo effect work for road crashes? He at least knew the bus driver’s phone number, so after stopping to ask for directions four times we just waited for the bus by the side of a highway.

The landscapes between Hanoi and Nanning are really something. It’s flat, green farmland punctuated by these massive thrusts of rock coming up from the ground – if not for the rice fields and farmers I would say it’s otherworldly. 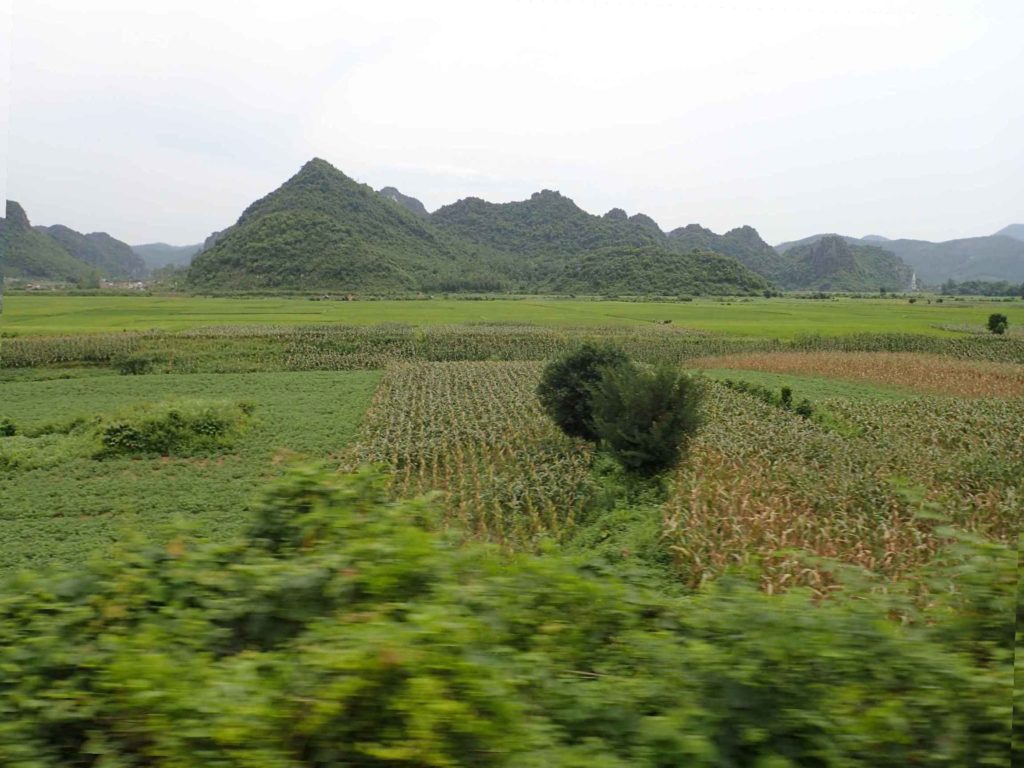 About halfway to Nanning I realized something: I’m an idiot. I need to go to Kunming, so why am I going to Nanning first?? It adds about $30 and 8 hours to the travel time. Damn. Thankfully the scenery made up for it.. but it’s still frustrating. 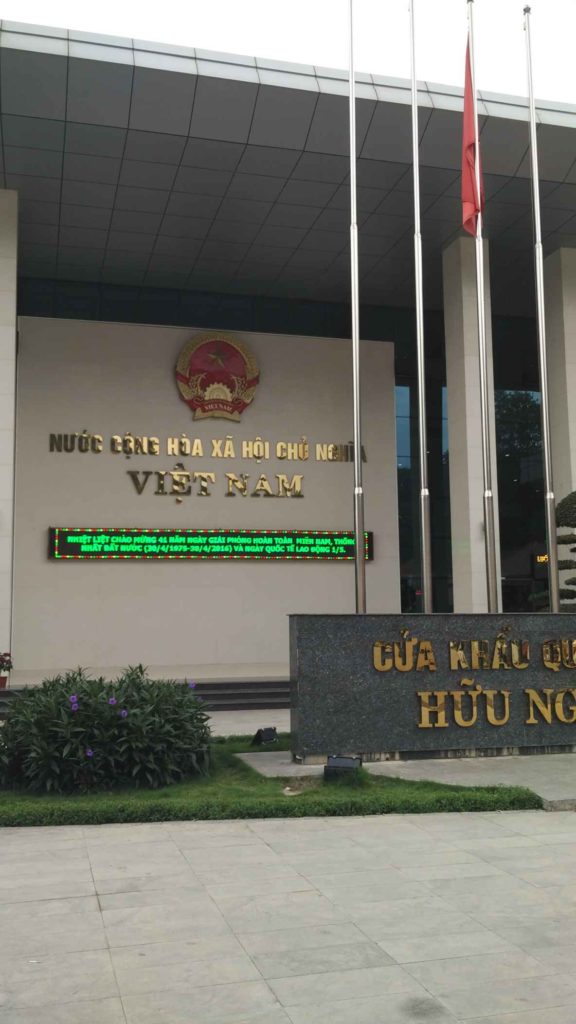 One of the first things I noticed about China was a) the sheer number of people and b) the amount of stuff – if something needs building, it’s built. Need a mall? Sure thing. Apartments for 50,000 people? No worries. Multi-billion dollar expressway? Don’t sweat it. It’s really astonishing, just the scale of development.

Even in ‘hard sleeper’ class, Chinese trains are very nice. It’s open-plan, with 6 beds per ‘compartment’, but each bed has far more headroom than Vietnamese sleepers – you avoid that ‘coffin feeling’. The mattresses are fine and people are generally amused by a foreigner (laowai) taking the train. Along the hallway there are fold-out seats, and old ladies regularly come through selling everything from water to electric shavers to belts.

The Chinese landscape has completely defied my expectations – in fact it’s irresponsible to label it the ‘Chinese landscape’; the place as big as America. It makes sense now I’m here, but I had pictured all misty mountains, pandas, and bamboo forests. It’s strange to see rocky fields, red, parched earth, enormous mountains, lush green pastures – all within 24 hours. But again, I know now I should have expected it. 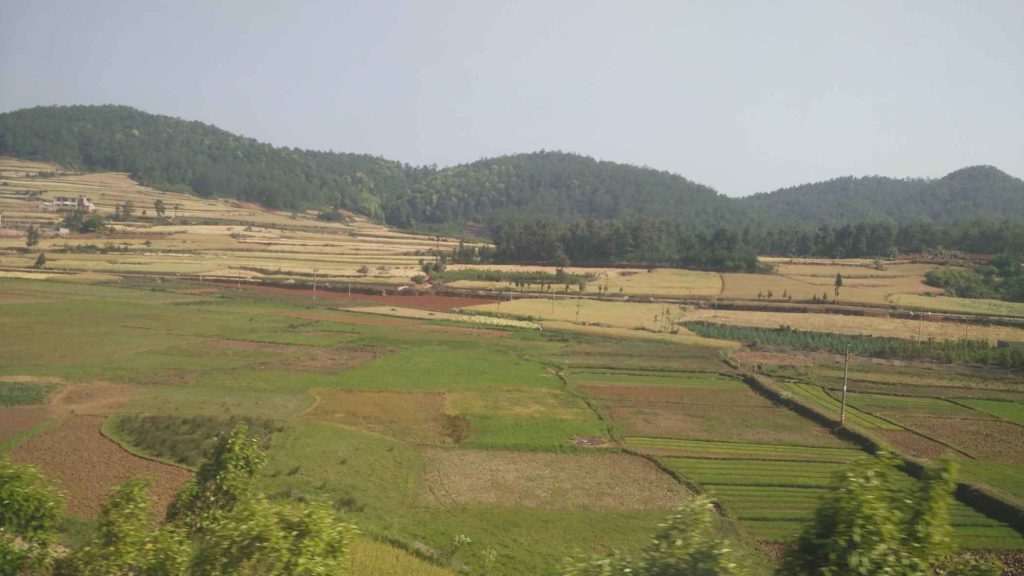 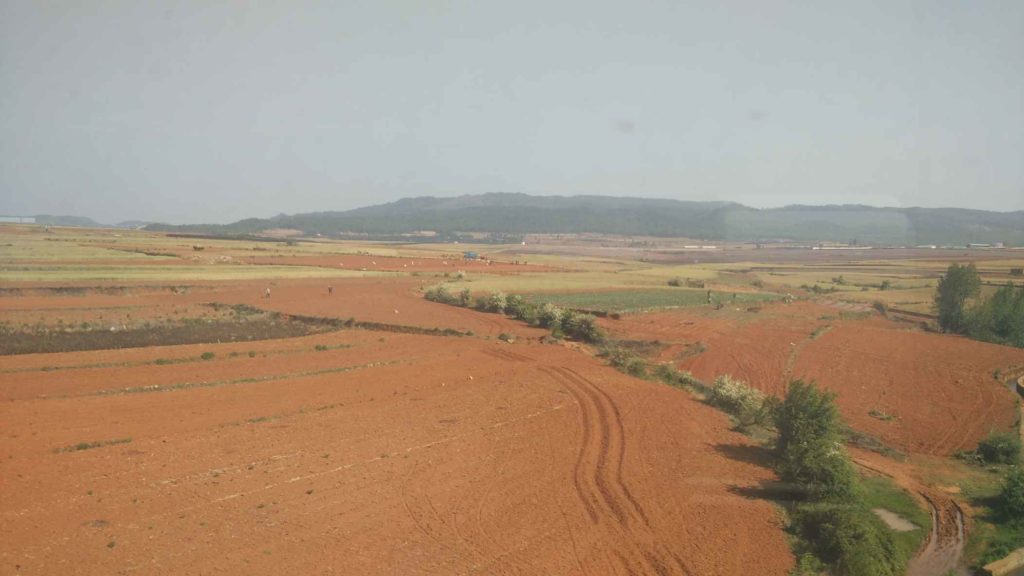 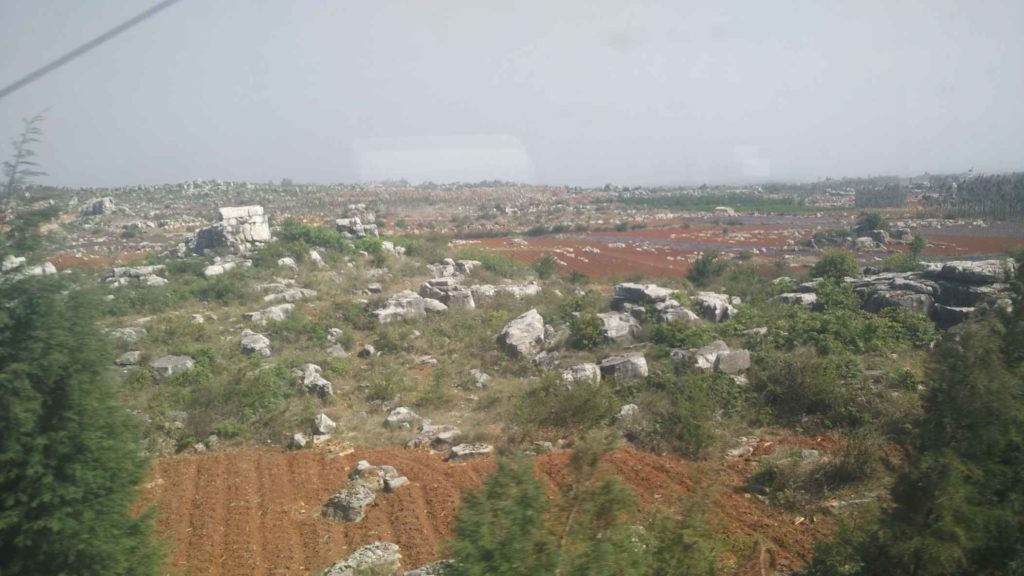 As we rolled across the above rocky landscape, the guy across from me pointed at it and said “Xilin” – an area in China. I responded by pointing out the window and saying “Meiyou shui” (没有水, ‘don’t have water’). He laughed and kept repeating it to himself under his breath – I guess that semester of Chnese paid off! The guy gave me a few Chinese mandarins (as opposed to Mandarin Chinese, hah) – I was about to peel it when he just bit straight into one – I did the same, tasted like a slightly less-sweet mandarin. 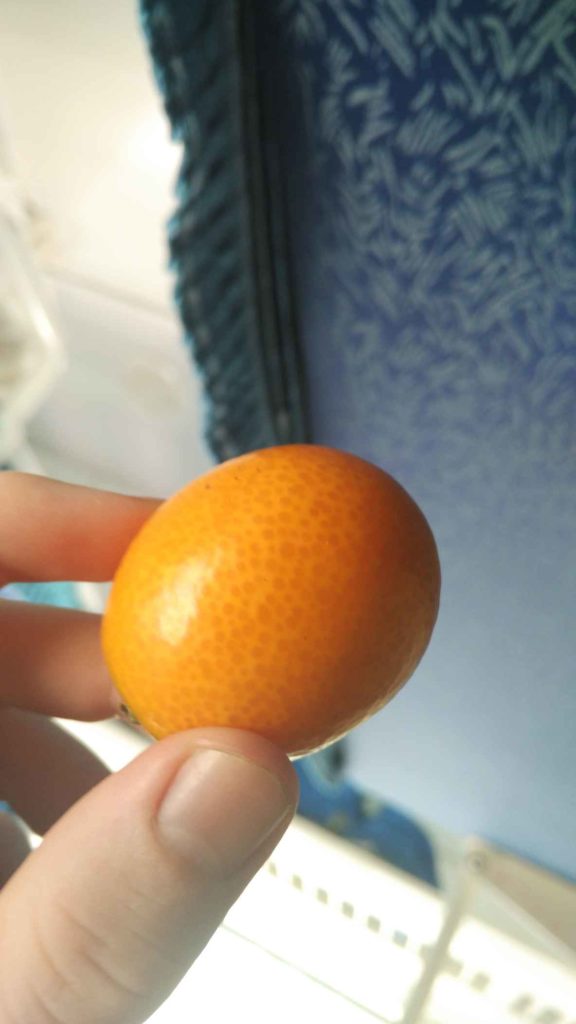 So one of the reasons I picked Yunnan to visit was that it produces about 60% of the world’s mushrooms, 80,000 tons annually. I’m a big fan of mushrooms, so I thought “sure, let’s go to China and pick mushrooms”. It was reassuring to see this on the bus ride to Dali:

As I was trying to get to Dali Old Town, located 20km outside of Dali itself (and the bus stop), a group of Chinese girls took it upon themselves to make sure I got there in one piece. My rickety Chinese was barely holding up, so I was grateful to say the least. That said, I am also eternally thankful I took a semester of Chinese back in Singapore. My currently level of Chinese is probably ‘not-die’ Chinese, maybe even ‘order beer’ Chinese. I have just enough Chinese to not die and order a beer: both very important things!

Dali is a small (ish) town on the south bank of Lake Erhai in southwestern Yunnan province. The Old Town area is sandwiched between the mountains and the lake, which means you get great views like this:

The four girls and I decided to get dinner and then explore Dali Old Town that evening. The meal went exactly as expected:

I ended up in a perfectly reasonable place that night: drinking a $10 bottle of lukewarm Budweiser as Chinese tourists in cowboy hats and leather jackets dance to a man singing Mandarin-pop while muted Western rap music videos play in the background – not a sentence I’d ever thought I’d write. And yet. Sometimes you find yourself in a situation at which you arrived quite logically, one thing following the next, but looking at the same situation without context seems to be the strangest thing in the world. I suspect it’s the first of many “how did I get here?” moments.

The next morning, I met up with the four girls again and we had a breakfast of 豹子 (baozi, steamed dumplings) with hot soymilk. There were also soup and fried dumplings – all delicious. We rented electric bikes and headed out to see Lake Erhai. 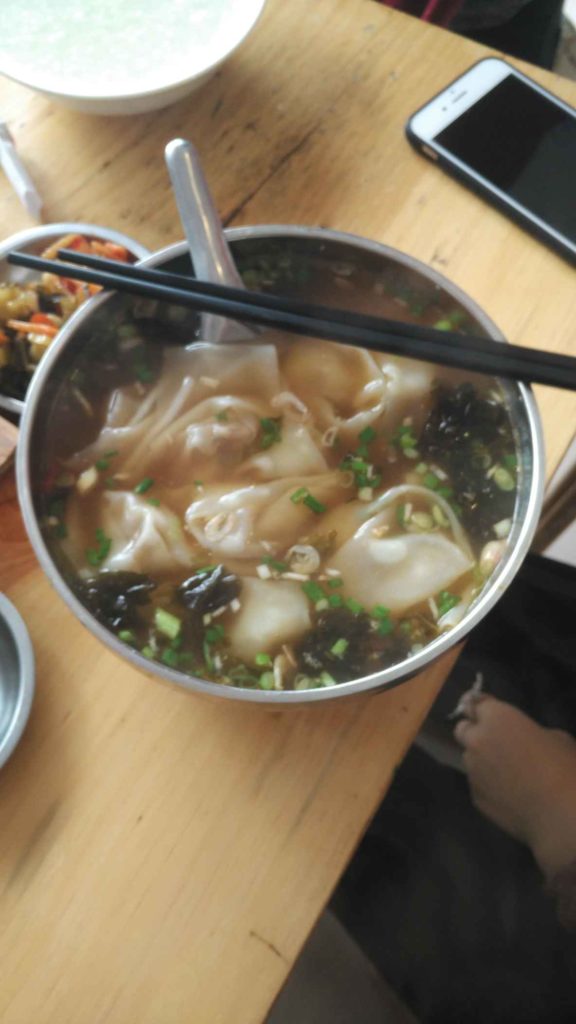 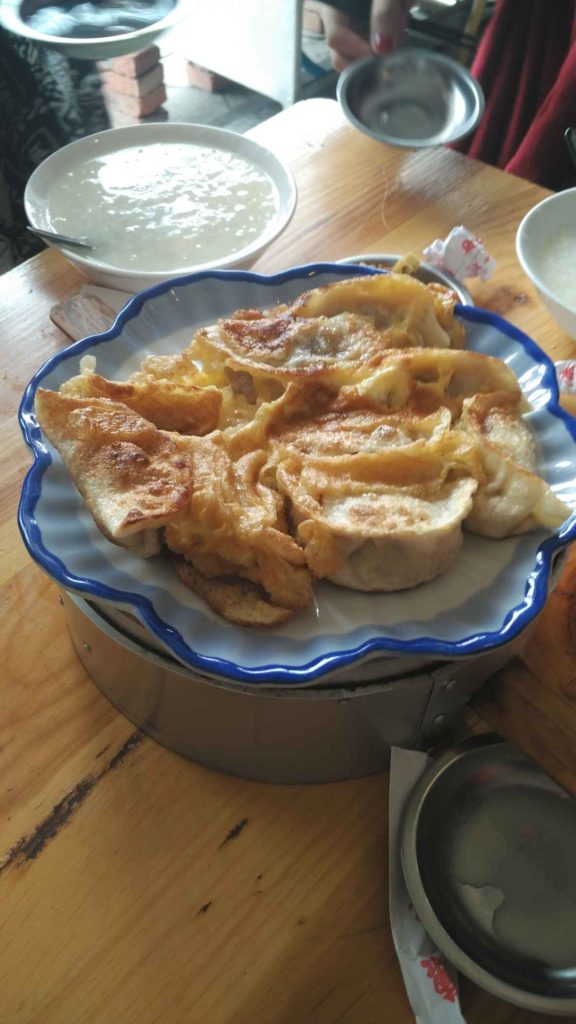 The Chinese really have a different way of communicating – ‘manners’ as they exist in Europe/America/Australia don’t apply here. Not that that’s inherently a bad thing, as an outsider it can just take a little getting used to. Those two aren’t angry, they’re just discussing prices – she’s not yelling at him, just asking him what he wants to eat. Whenever the girls would stop and discuss something in Mandarin, their voices would rise and they would frown angrily at each other, but apparently they were just working out where to go next.

Driving through the old lakeside towns, the villagers would lay out hay or crops or something for traffic to drive over – I assume this is to help it dry out or to separate the chaff. Pretty sure it was some form of corn/beans to be used as animal feed. 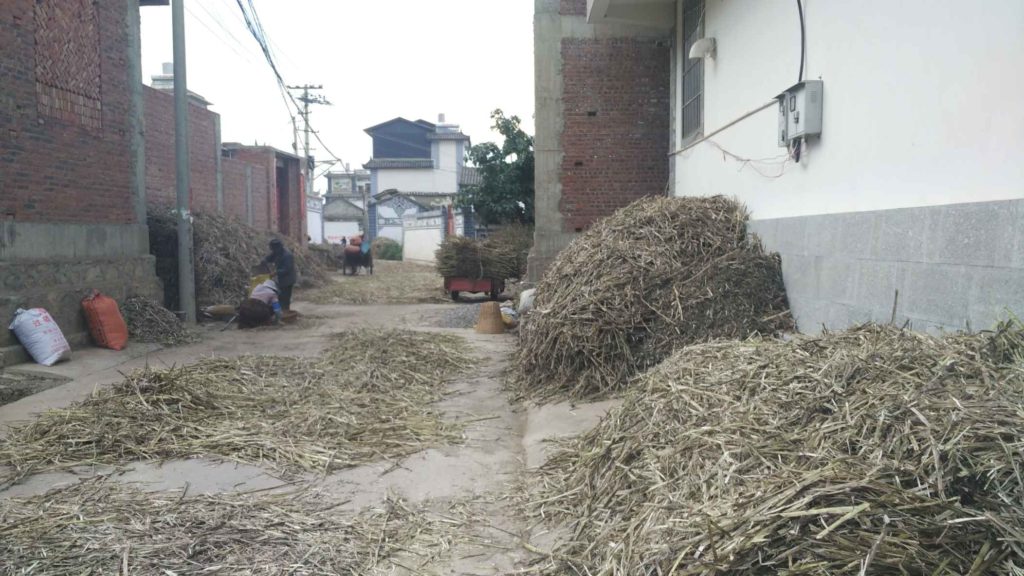 It was spring onion harvesting time, so there were these great big bundles of fresh onions by the side of the road – the smell was amazing! Speaking of smells, I thought I recognized something – I did! Turns out there are lots of gum trees (eucalypts) around Dali, as they produce eucalyptus oil for makeup, hair, and beauty products. A strange thing to smell your childhood in rural China.

I had a fantastic time with the four girls, driving around Erhai – though I don’t think I’ve ever taken as many photos in one day… Every ten minutes was a new photo opportunity for selfies and jump-shots and pensive gazing pictures. I think I’m getting PTSD just writing about it.

Compared to the larger cities, people in Dali seem much friendlier. One couple rallied the neighbours to help me find an address, and everyone did their best to understand my Chinglish (Chinese + English). Maybe it’s thanks to a smaller population? A town more adjusted to tourism? Either way, it’s nice.

I’m currently in Shaxi, an even-more-rural town a couple of hours into the mountains from Dali. Another post soon(er) – I’m already about to catch the overnight bus back to Kunming, followed by a 34 hour train to Beijing (wooooooo…) 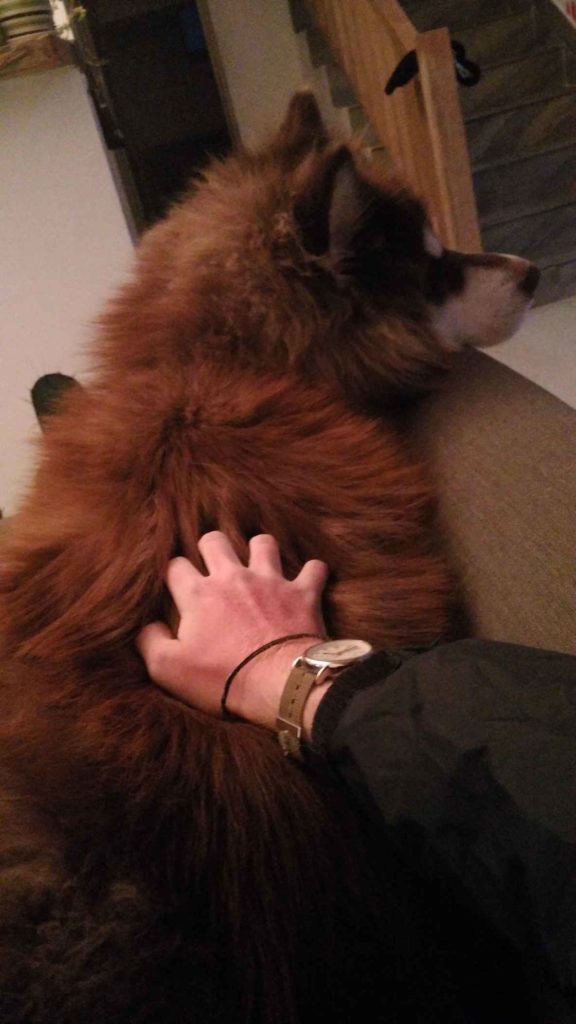