Day 29: The Black Market and the ‘mini-Gobi’ desert

I had a free day in Ulan-Bator before I headed out to the Gobi for 2 days, so I decided to check out the ominously-named ‘black market’: Naran Tuul. It’s Ulan-Bator’s largest market, and while you can’t quite buy arms, kidneys, or order assassinations, it’s like the ‘original’ supermarket.

Naran Tuul must be 2km by 2km, and is peppered with vendors selling everything from bicycles to horseriding tack to shamanic goods to couches to leather boots to stoves to crockery to sweets to tailored suits. It really contains anything a nomad could ever want. Indeed, certain sections seemed tailored to nomadic life: leather boots next to riding tack next to hunting knives next to stoves and cast-iron woks – the kind of woks you do all your cooking in, from porridge to stews. 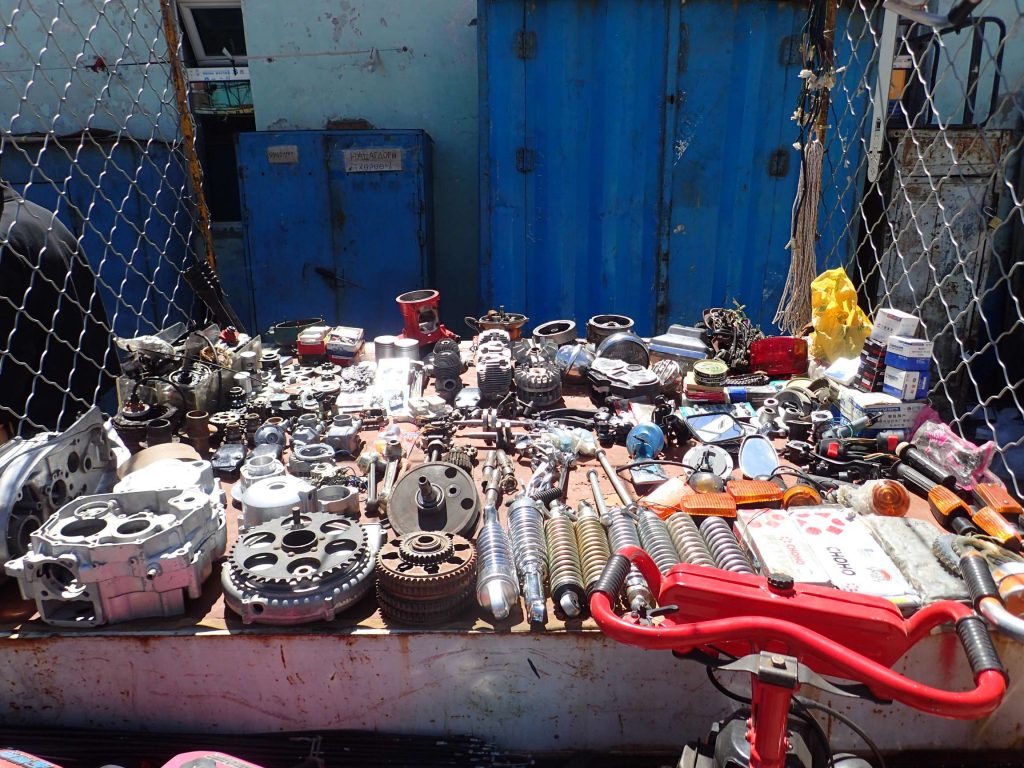 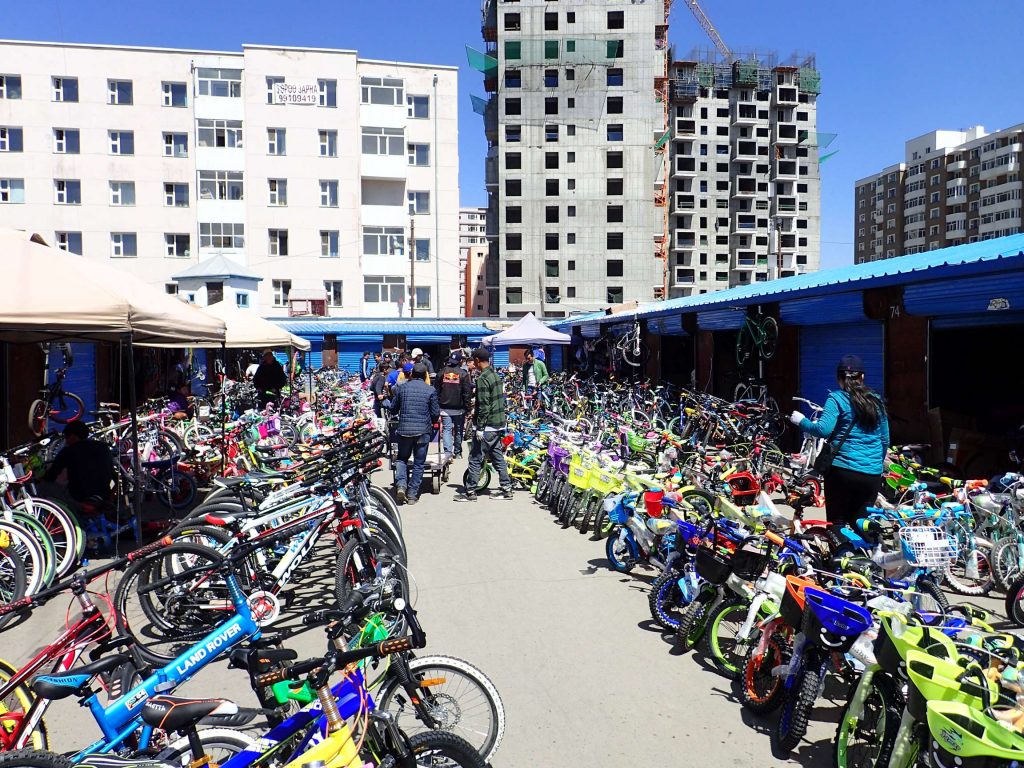 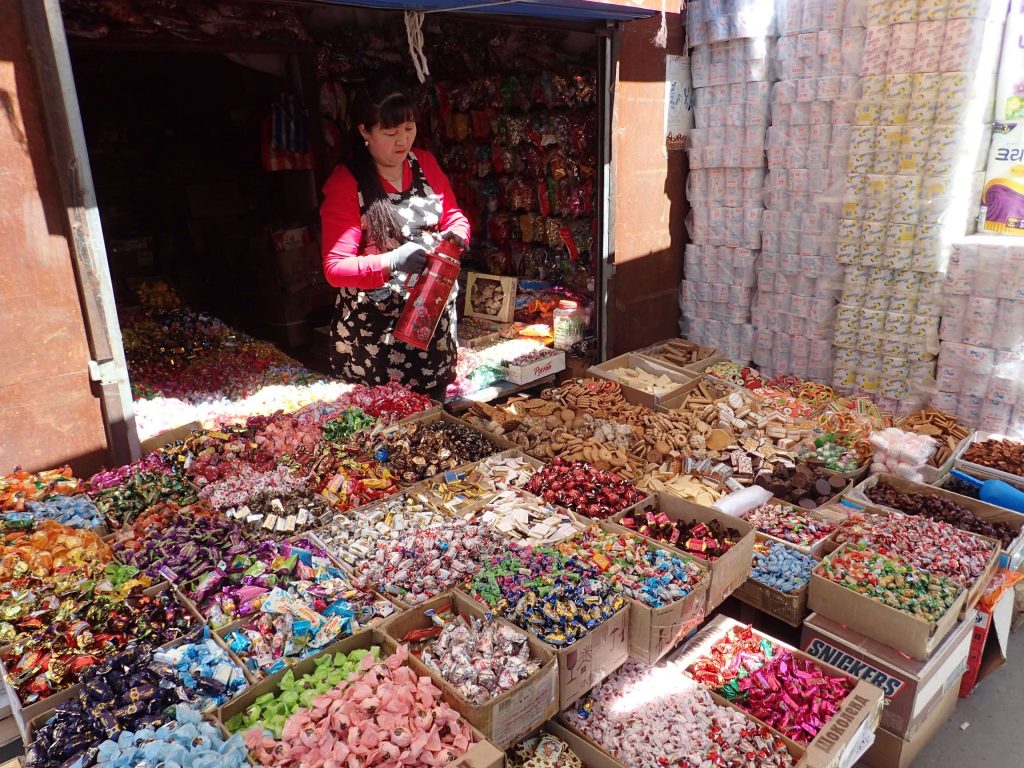 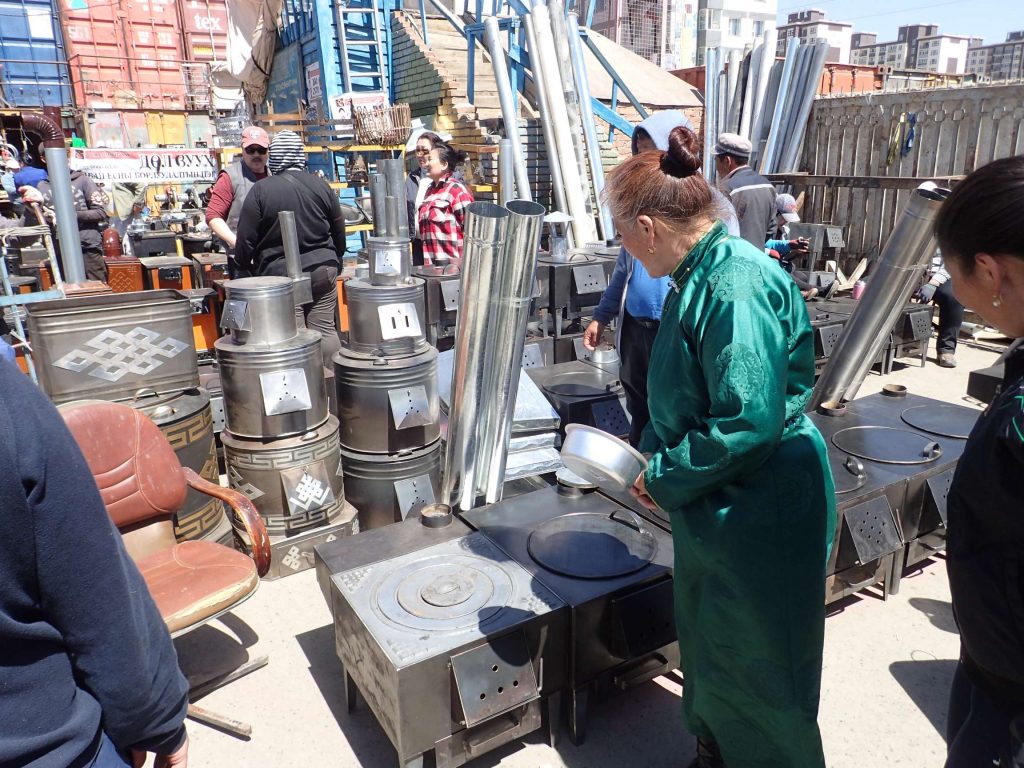 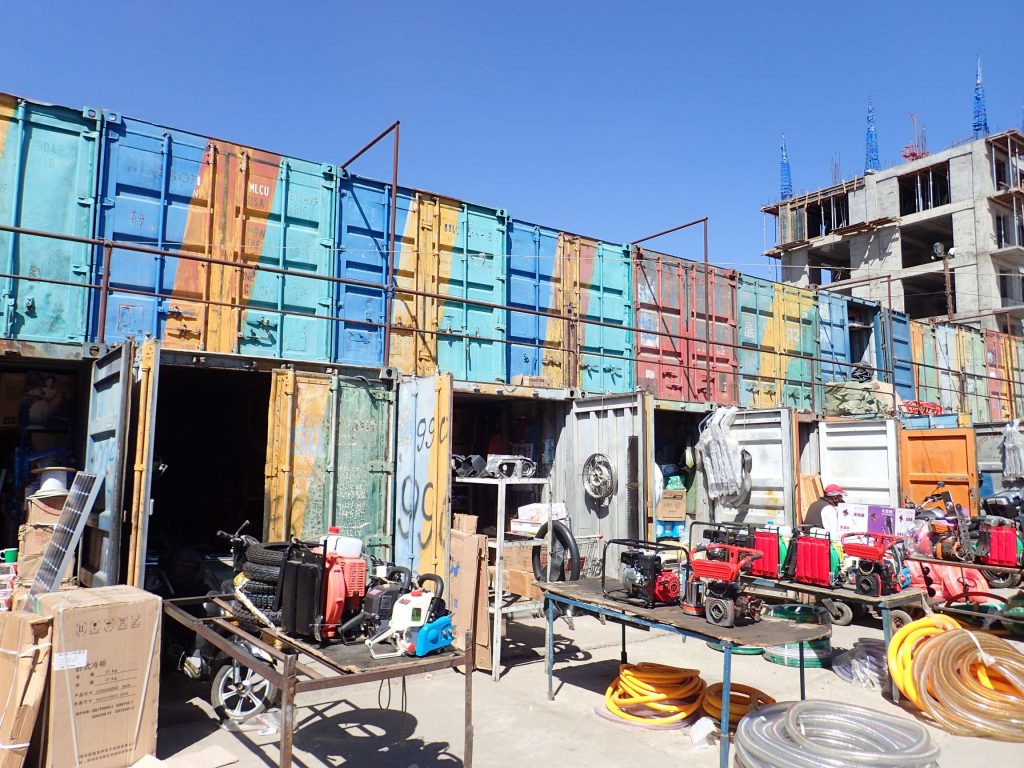 It seems like there’s really a culture of reuse and recycle – if only by necessity. Much of the stuff at Naran Tuul seemed to be scavenged or at least repurposed, especially in the mechanical goods area. It really emphasises the lifestyle of the nomads to see how much space is allocated to each type of good – the boot section was enormous!

After killing 5 hours at the market, Johannes (an Austrian also headed to the Gobi the next morning) and I headed back to the hostel. There we ran in to a Peace Corps guy who we got dinner with.

Mongolia, while famous for its vast, open spaces and wild nature, is not a country known for its food. Ghengis Khan’s people survived mainly on boiled mutton and fermented milk, and the cuisine hasn’t changed much since then: dinner was pasta with bread, boiled mutton, and some artful dabs of mayonnaise. Mongolian food is not bad – in fact, a couple of dishes (mostly variations on dumplings) are great – but it’s just not particularly special. It’s survival food – ‘eat to live’ and all that.

The Peace Corps guy said he’s been living in Mongolia for the last two years. He’s assigned to a tiny village somewhere in the wilderness, and is living in an old Soviet apartment block with a hammer and sickle painted outside his window. He does computer repair on the side, along with teaching English and other general ‘Peace Corps things’. Despite our incredulity that someone would choose to live here for two years, he seemed to have liked it. He admitted the food got tiring after a while, though. Come winter, you can only really eat root vegetables, pasta/rice and mutton for the better part of nine months.

We left bright and early for the Gobi, with our crew of an Austrian, an American, three Swedish girls, and me. Outside the hostel, our transport was waiting: a gloriously refurbished Russian van. Our translator said its original purpose was a garbage truck! The USSR must have had very fancy rubbish collection.

Pre-expedition shopping, I saw something in a trolley and couldn’t resist a picture:

These were just sitting in a trolley waiting to be ‘processed’. ‘Processed’, of course, meaning sawn up by the old lady busy with another carcass behind the counter. This is pretty much what happens in Australia/the west, only behind closed doors (and probably with more stringent OH&S rules!).

We drove over a salt lake that was apparently less dry than it looked, and promptly sank in. Aagi was apparently used to this: without breaking a sweat, he retrieved a wrench, switched the wheels to 4WD, and we were on our away. 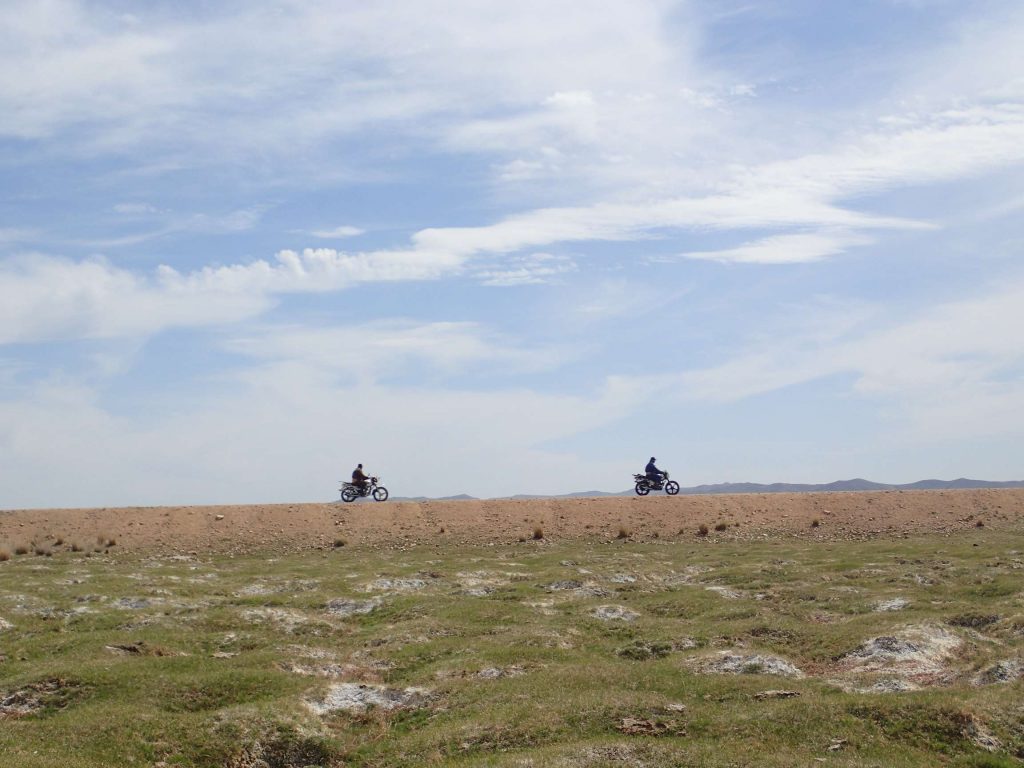 The asked if we would like to see the goats being milked. Of course, we said yes – apparently this is a common ploy to get us running around and catching the goats! It was lots of fun; reminded me of herding the sheep back in Adelaide.

There was a rope suspended across the pen to which the goats’ horns were wrapped – if we managed to catch them by the horns and drag them there, of course. After I pulled a few male goats to the centre of the pen, the grandma grabbed my hand and placed it between a goat’s legs – I felt a bulging udder, and I felt like a bit of an idiot as I realized they only wanted the goats with milk (duh). 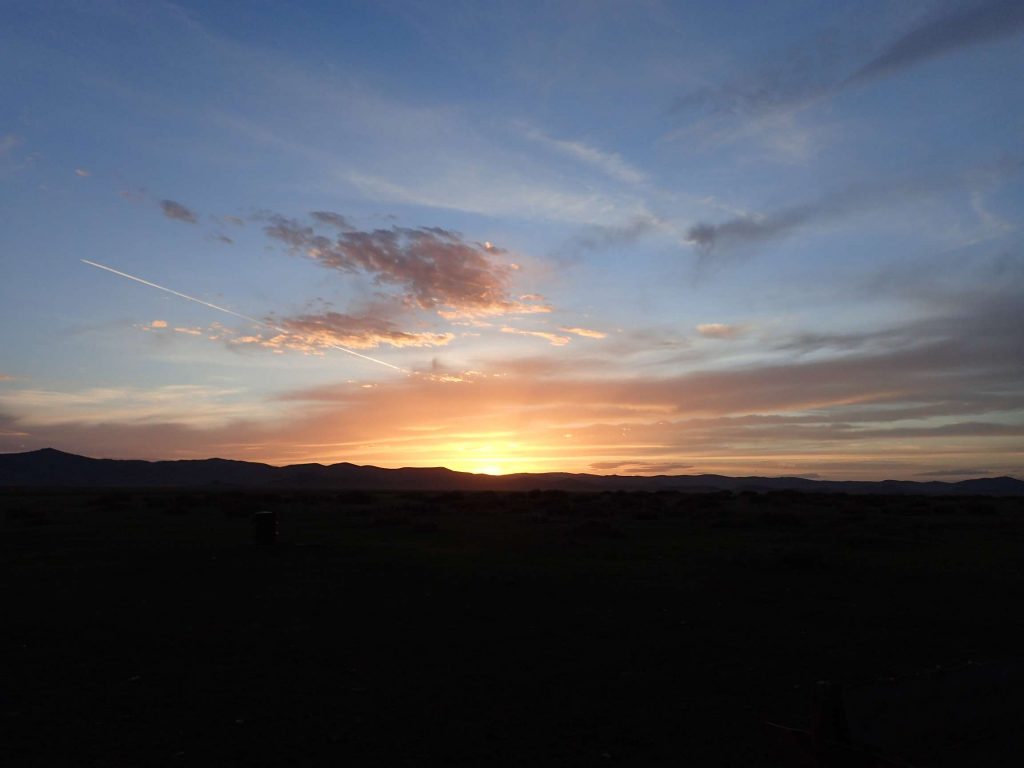 Next morning was the most touristy part of our trip: camel riding! I’d ridden a camel once before in Egypt, but only single-hump; these were double. The hardest part of riding a camel (other than the spine) is getting up/sitting down – these things are enormour, more like small elephants than big horses, so you can only get on or off them when they sit down. Camels stand with their hind legs first, so make sure you lean back and push on the hump/neck in front of you – unless you want to end up with a face full of camel! That’s a smellier prospect than most people imagine.

I had to head back to Ulan-Bator to catch my train, so I farewelled my new friends and found myself standing with the poser/father, his motorcycle, and some camels in the middle of nowhere. I was supposed to catch a bus back to UB, but the poser/father wanted to go for a joyride, so we hopped on his bike and sped along the road for a while. It’s really impossible to grasp the scale of Mongolia’s openness, it’s just mind-boggling. I did, on the other hand, grasp the fun of careening across fields on a motorbike.

When the bus – well, it was more of a van – to UB arrived, I slid open the door to see it crammed full of Mongolian faces. I squeezed into a tiny ‘seat’ between the edge of an actual seat and the door and promptly became the subject of all conversation in the car for the next hour. Eventually I had a phone thrust in my face with Google-translated questions such as “Where are you from?”, “Do you have a girlfriend?”, and “Do you like cheese?” Back in Ulan-Bator, I made my train and slid off into the horizon, neither for the first time nor the last.

‘Til next time
– Alex

BONUS: This is my ‘Ultimate Travel Playlist’, compiled just before I left. It’s downloaded to my phone so I can listen offline. There’s nothing quite like listening to Just Can’t Get Enough while bumping over the Mongolian desert, or Walk on the Wild Side on the train across Russia.