As soon as I found my compartment, I was greeted by two Brits: the fourth bed was empty, and soon became the drinks cabinet. Another passenger later quipped the bed was empty because there wasn’t room for any more personality. The two were Luke, a guy travelling to Dubai overland to meet his girlfriend, and Laura, a worldly woman who loved to dance and had an accompanying taste in music (mostly 80s disco). The entire carriage seemed to be filled with travellers (the other six carriages were exclusively Russians), and before long people were opening beers and mingling – I even heard a champagne bottle go off. Of course, I ran in to multiple groups I’d met on the Beijing-UB leg. There’s a good sense of camaraderie amongst everyone, and we greeted each other like old friends. Laura had brought bread, cheese, tomatoes, and ham, so we had a feast on her generosity.

At our first stop, we were informed we were stopping for three hours so we decided to go and find some alcohol. The town was… undeniably Russian. Coming from the Mongolian steppes, you immediately see the building tools of Siberian architecture: trees! Almost instantaneously, the building styles change and you straight away feel like you’re in Russia. 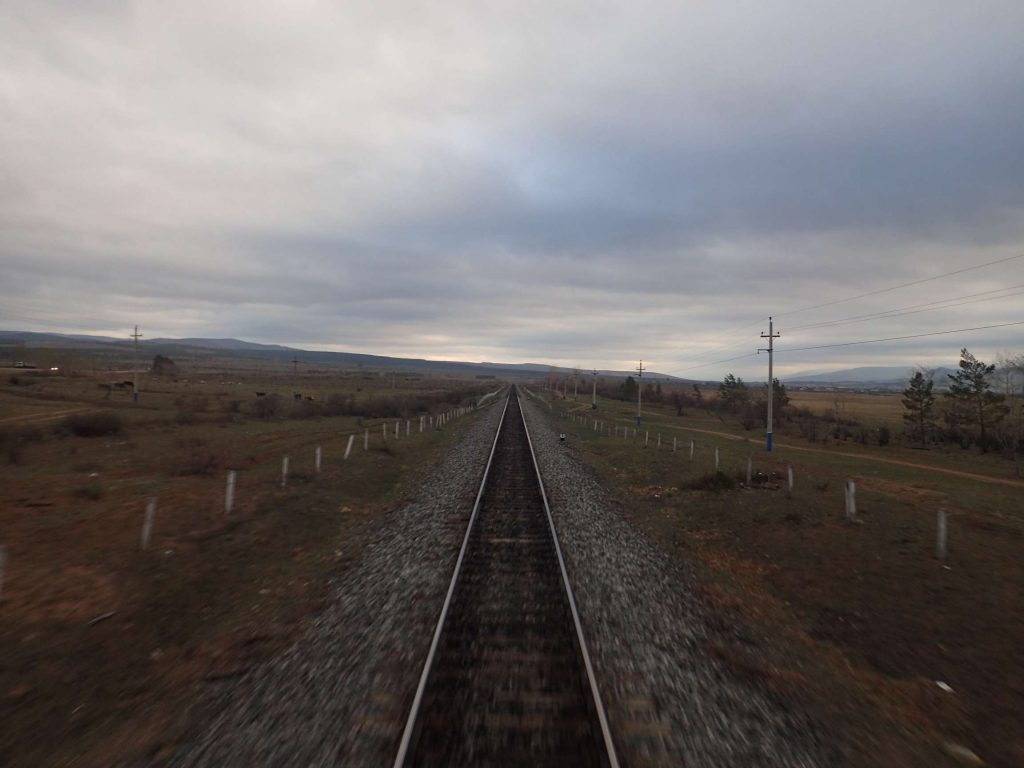 We arrived in Irkutsk around 7am. I took the 15 ruble (30c) bus to the city centre. One of the first things I noticed about Russia is that the taxi drivers aren’t like in Asia, where you’re heckled and yelled at with “Taxi? Sir, you want taxi?!” and infinite variations thereof. Here, taxi drivers consist of exclusively late-middle-aged men wearing flat caps and black leather jackets who, as you draw near, simply look at you and say under their breath: “… Taxi?”. It’s nice not to be verbally molested as you try to leave a station. I stayed at the Rolling Stones hostel, a newly opened place which coincidentally has excellent music. The exceptionally helpful owner sat down and went over a map with me, marking out good places to eat and drink.

Irkutsk is a fascinating city that was (and is) the ‘Jewel of Siberia’. When the exiled Decemberists were sent here in the early 1800s, they transformed the town into a cultural centre by making fashionable education, reading, and other ‘civilised pursuits’. Although the golden age has passed, the remnants are very well preserved, and the town’s tourism office has walking trails around interesting areas. The result of these things is a lot of interesting museums and old buildings, neither of which make for entertaining blog posts. I would recommend spending a full day in Irkutsk if you have the chance, though – it’s fascinating.

So I originally thought the above statue was some sort of comment on the proletariat versus the bourgeois – I mean, it is Russia… then I found a source online that said it was Tintin (there’s a small dog next to the seated man), but – as now confirmed by my hostel – it’s actually Leonid Gaidai. He’s a famous Soviet comedy film director; the three men are actors in a scene from one of his most famous movies!

When I’d asked the hostel owner if there were any markets around, he looked puzzled and said “Like… supermarket?” It was with some relief, then, that I found the local fruit and veg market in the centre of town – right between Karl Marx Street and Lenin Street (I would later come to learn that these street names are common across almost every Russian city). In season were radishes, ramps (wild onion), tomatoes, strawberries, cherries and, as ever, potatoes. 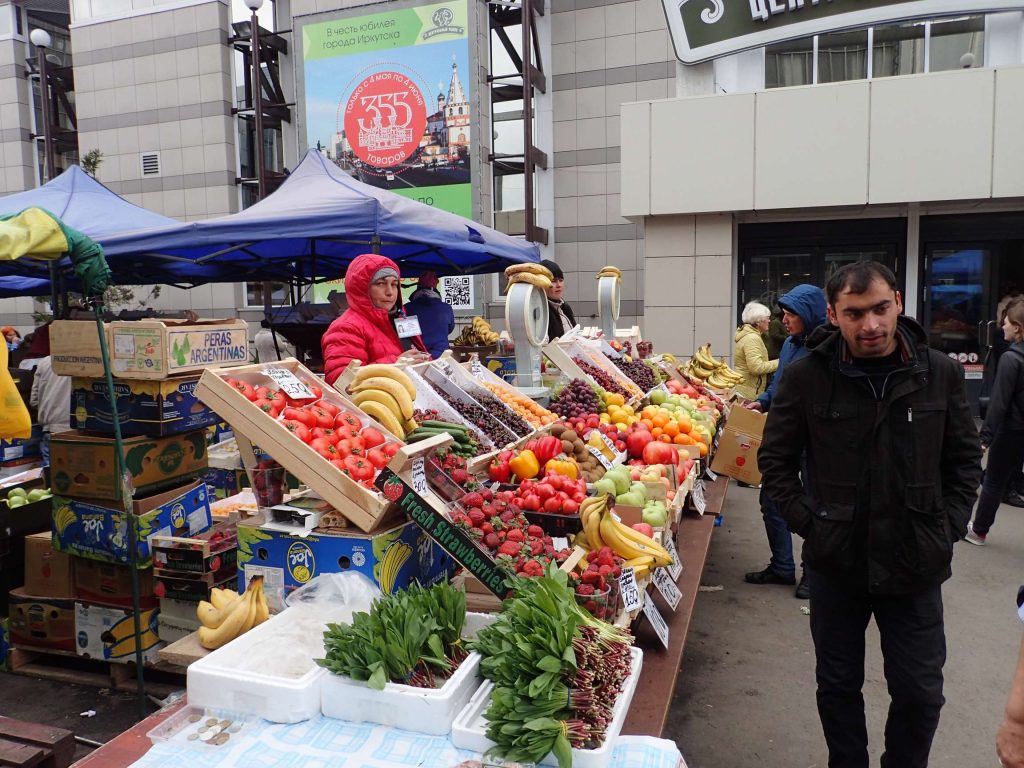 If you’re ever in Irkutsk, you have to eat at this place called Rassolnik (that’s also the name of a soup, so you might be out of luck if you ask someone on the street where it is…). Recommended by the hostel guy (and the internet, as I later discovered), it’s an upmarket Soviet-style restaurant serving Russian classics. The Russian equivalents of ‘Poisson en croute’ (itself literally just ‘fish in bread’), that sort of thing. Oh, and when I say ‘upmarket’, my 2-course lunch plus cappuccino came to 650 rubles, $13. A similar meal back home would set you back at least 50 bucks. If not just for the food, then for the suited waiters and Stalin-era decor – go here!

The next morning, I headed for Listvyanka, the actual ‘seaside’ town on the shore of Baikal. It took about an hour (no traffic) and cost 110 rubles (just over $2). Although Listvyanka is a town that relies almost totally on tourism, there’s enough stuff here for one full day, maybe two. It mostly acts as a hub for general Baikal tourism: you can take a multi-day trip to any of the islands – the most famous being Orkhon, take the circum-Baikal railway, go on various tours or just go hiking to the next town. I got a room at the Belka hostel, about 2km up one of the little valley roads. Most of the waterfront development has been handed over to more expensive hotels. I think Belka was 750 RUB for a night, same as what I paid in Irkutsk. The hostel was clean and welcoming, if a bit of a hike to reach.

In town, I kept running in to people I’d met on the train/Mongolia, evidently everyone had the same idea of just one or two days around Baikal. We set a rendezvous point for beers later then split up to explore. Listvyanka itself is nice enough, the shoreline is a little grim thanks to barely controlled development, but the little valleys where the locals live in traditional wooden houses are lovely. There are lots of hiking trails in the surrounding hills, too. The best part of Listvyanka, though, is Baikal itself. The pebble beach provides great fodder for skipping stones into the crystal-clear water. The water is so clear thanks to an unusually high oxygen content, part of the reason so many unique species have evolved here. The water is also said to extend your life and cure ailments, so I did the only sensible thing:

It’s really quite picturesque, gazing out at the snow-capped mountains on the other side of the lake as the waves break lazily on the shore. It feels more like England than Russia, but it’s a welcome change from trains, buses, and cities. 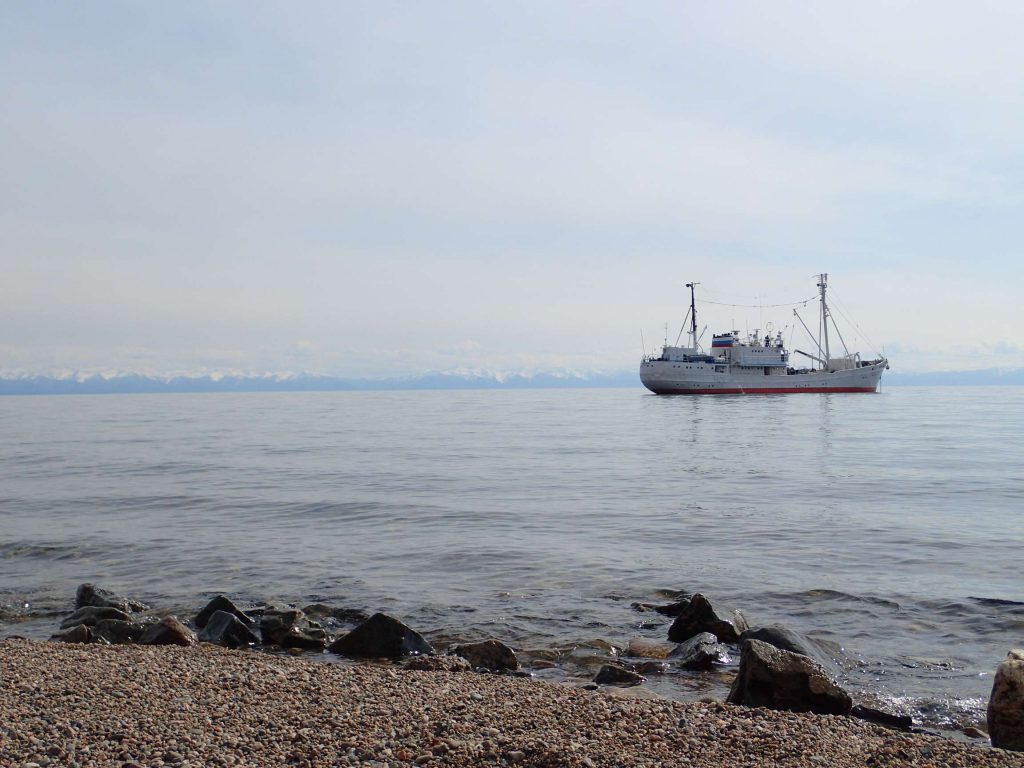 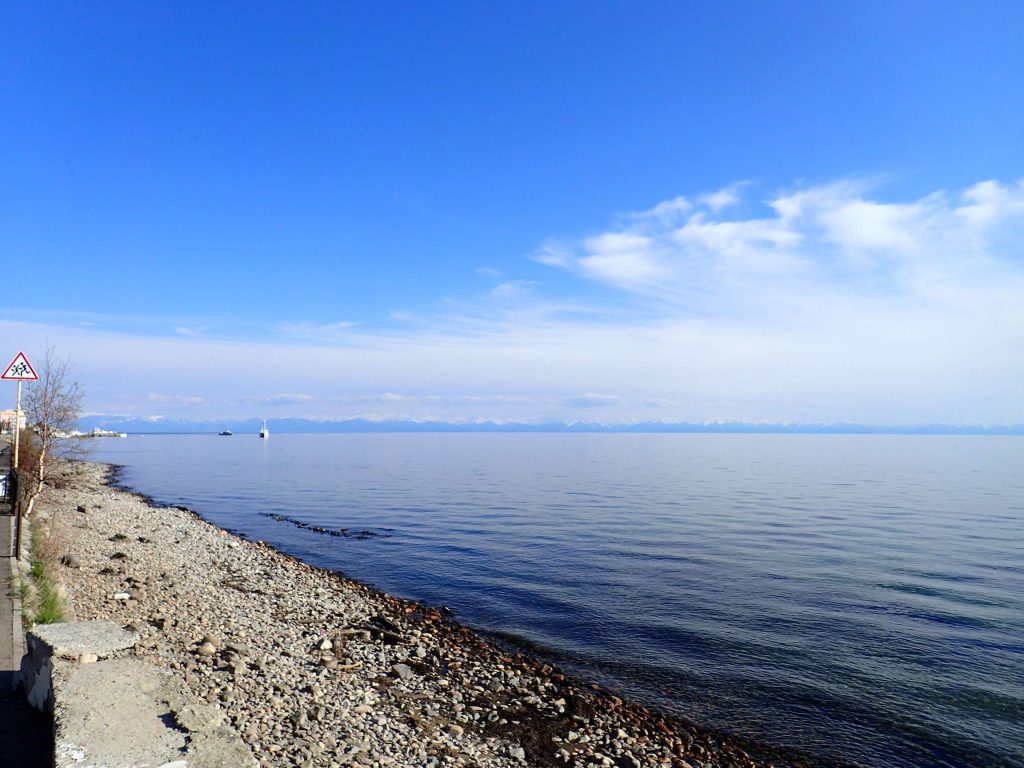 It was a few weeks before summer/tourist season started in earnest, but the Uzbek and Kazakh vendors were already on the beach, vainly hawking their kebabs to uninterested tourists. Just across the road running alongside the beach was the market I was looking for: the fish market. Rows upon rows of weather-beaten old men and women talked at me in Russian, beckoning me over and pulling the lid off a container when I got close enough. Without fail, each one contained the same type of hot-smoked fish. Each vendor also had piles of splayed cold-smoked fish, raw fish, fish eggs, fish the size of my finger and fish the size of my arm. I bought a hot smoked omul and a little smoked fish. Total: 100 rubles, $2.

Both of these are unique to Baikal and prized as delicacies, but the little one is particularly interesting: it lives at depths of 1.5km, where it requires 35% body fat to keep itself warm. This means that, when caught, it quite literally melts in the sun. Carefully smoked, it’s like rich, salty butter – perfect with fresh bread. The omul was unexpectedly good. I knew it was prized, but wow, I didn’t know smoked fish could get that good. It’s extremely satisfying to just tear into it with your teeth – the tiny bones just slide right out of the meat. Result:

I met the others for several beers and we talked the evening away. While Listvyanka was a balmy 18c during the day, walking 2km at 11pm after a litre of beer wearing flip-flops and a windbreaker puts a certain spring in your step.

I was off early the next morning to be back in Irkutsk in time for my 12:30pm 18 hour train ride to Krasnoyarsk.