Dropped at the border with Georgia some 30km from Vladikavkaz, I approached the crossing on foot. A long, snaking line of cars and trucks backed up a few kilometres through the valley. The crossing is placed at the base of the Caucasus mountains, nestled in a deep rocky valley. Bored looking families wandered around, waiting for the line to inch forward. A fast, loud stream ran underneath the bridge right before the crossing – it was as much a natural geographical border as a political one. Everyone I asked said the border was vehicle-only, so I put on my best ‘stupid tourist’ expression and started wandering through. A guard shouted at me, I pointed towards Georgia, he pointed at a car. I shrugged. He beckoned me over, then said something to the man in the nearest car – a sleek black Ford. The man glanced at me then, almost imperceptibly, nodded. I jumped into my new best friend’s car. Forced hitchhiking: success.

Leaving Russia felt more like checking out of a prison: upon seeing my passport, the officer’s walkie talkie came alive as he inspected it from every angle and in every light. He looked like an older, plumper, blader Martin Freeman. His superior came in and verified that no, I was not an enemy of the state. I was questioned on where I had entered Russia – my answer of ‘Irkutsk’ raised eyebrows. After a few minutes, I had officially left Russia.

Entering Georgia, on the other hand, was much more relaxed. The guard told me how to say ‘thanks’ in Georgian: madloba. Emerging from the other side into Georgia, my ride told me he was being held back for passport ‘formalities’ (I hope he’s ok), and to go on. I obliged – my destination was Stepantsminda, the capital of the Kazbegi region, just 7km away. I can walk that.

The Georgian side of the border is undergoing major renovations, so the whole place was a construction site with massive trucks full of rocks all around. I was the only one walking. I stopped a church briefly to eat some a tomato, where I met an older German man on a trekking tour of Georgia – he had his own driver and translator. About ten minutes of walking later, they pulled up next to me and offered me a ride – they were headed that way. As it turned out, the German was working in Hamburg and had been in Adelaide several times to oversee some submarine construction work. He said he’d met the premier a few times. Small world, huh?

In Stepantsminda I found the cheapest place I could, 15 lari (GEL, 1 AUD/SGD = 1.5 GEL). Georgia is surprisingly expensive – more European prices than Asian or Middle Eastern. It was a bed in an old lady’s house which had practically every room stuffed full of beds. I was the only guest, apparently it was low season.

I headed straight out into Stepantsminda to visit the main attraction: the Holy Trinity Church, a 1.5 hour hike away on a hilltop overlooking the town. One of the oldest in Georgia, it was constructed in the 14th century and has survived its fair share of ice and snowstorms. Stepantsminda is a small town focused on trekking/climbing/mountain biking; it had that alpine feel (fitting, given we were almost 2,000m up).

I walked around the hill and ended up on a large plateau, at one end there were some people camping. 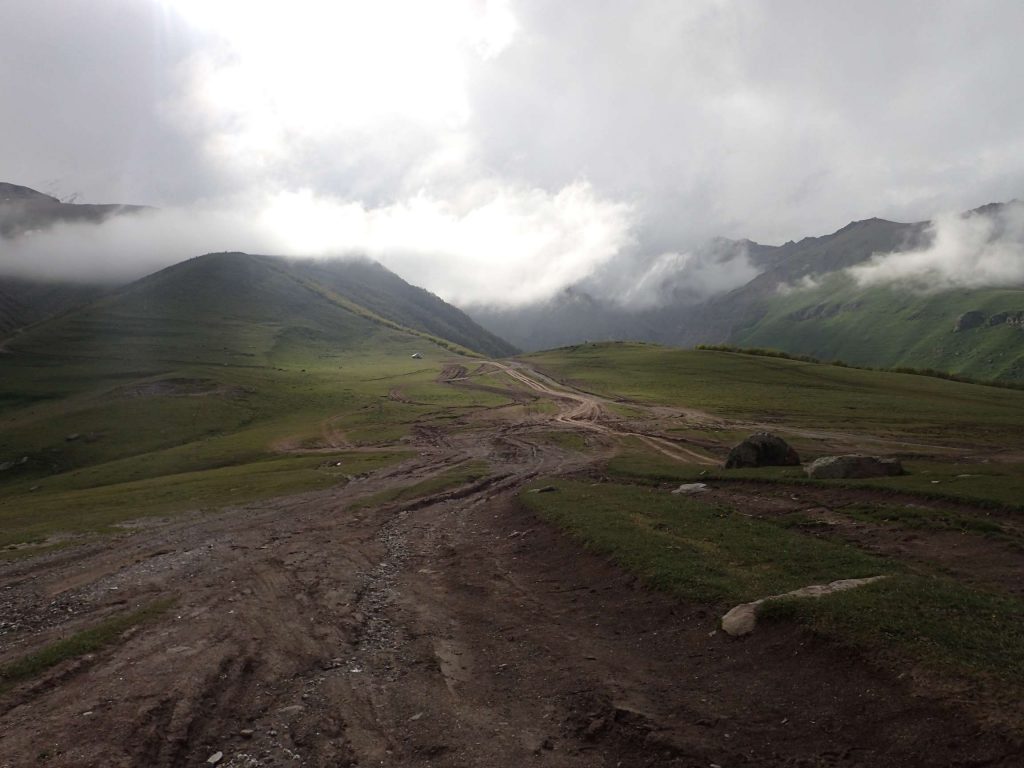 A steep and rapid descent and I was back in town in time for dinner.

I found a restaurant that looked ‘popular enough, considering it’s low season’. I ordered the famous Georgian dumpings, khinkali, and some of the local hooch, cha-cha. Incidentally, they were the cheapest things on the menu; the waitress grinned at my order. Khinkali are massive soup dumplings filled with beef, pork, and spices all minced together. To eat, grasp the knobby piece of dough at the top and, with the first bite, suck out the soup inside (warning: hot!), then continue at your leisure. To eat the knobby dough at the top is supposedly the sign of poverty, so you leave them on your plate as trophies – bragging right as to how many you’ve eaten. Apparently, Georgian men will plow through 15-20 of these, no problem. 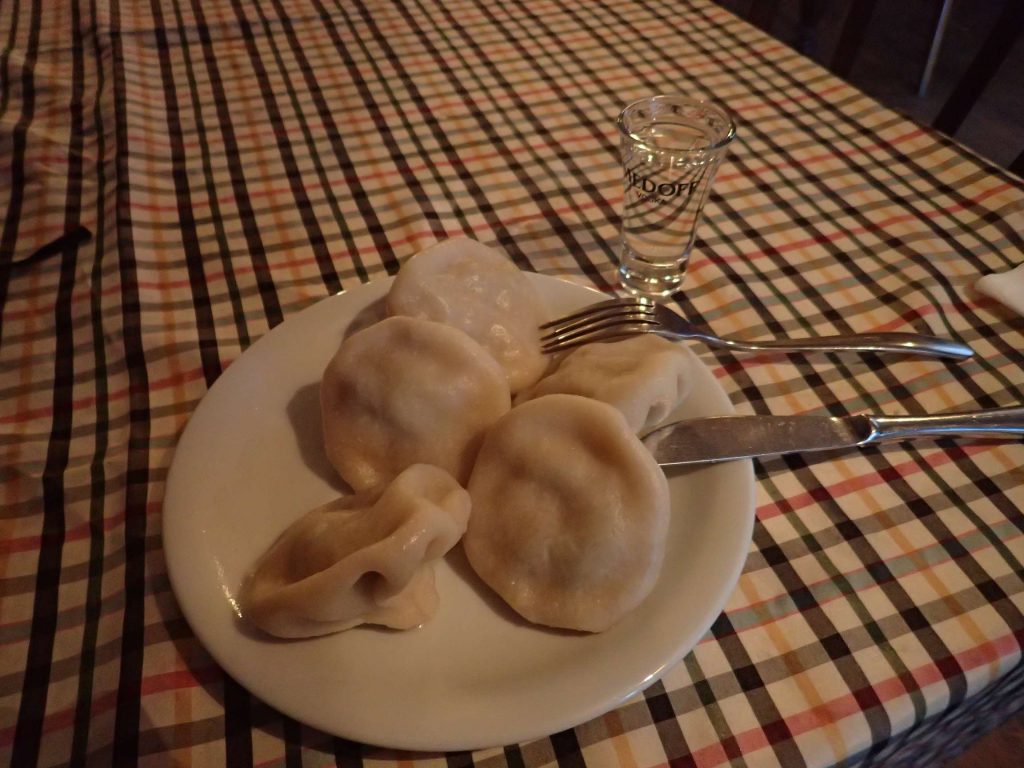 The next morning, I caught the marshrutka (minibus) to Tbilisi, the nation’s capital.

On the bus, I met an American guy and an Austrian girl who had themselves just met in Stepantsminda. I tagged along, apparently they had cheap hostels.

Geopolitically, Georgia has always been in a hotspot. Flanked by the Black Sea, the Caucasus, Turkey, and the fiery oil-lands of Armenia and Azerbaijan, its border with Russian is an enormous mountain range which controls trade and troop flow in the region. Georgians are proud, religious, and intensely hospitable. The first remnants of wine-making have been found here, dated around 8,000 BC, a tradition that lives on to this day. Almost every family makes their own wine, and it’s common to see roadside stalls stocking repurposed Coca-Cola bottles filled with the local vintage. Georgia is also something of a culinary destination; every other restaurant in Moscow seemed to be Georgian.

At the southwestern side of the city there’s a large ridge and valley. In the valley are the botanical gardens which give the air the most fantastic Mediterranean smell, and on the ridge are various statues, lookouts, forts, and billionaires’ houses. What? Yeah, Georgia’s richest man has a mansion overlooking Tbilisi, complete with private zoo. Incidentally, his albino son is also Georgia’s most famous rapper. …He was also the country’s leader a few years ago.

Tbilisi is a surprising city, especially when considering its location in the Caucasus, closer to Russia and the Middle East than Europe. The streets are paved and oak-tree-lined, with buildings that remind me of France; the oaks smelled like back home. Alternating with the stylish European buildings are ancient churches and oddly modern art galleries and public places built in the last few years. Old-school bakeries, cheese shops, trendy cafes and wine bars dot the streets. Did I mention wine is big in Georgia? Puzzlingly, the EU flag is everywhere, despite the country not being in the EU yet – though they’re apparently trying their hardest. The people are stylish and unique, a product of newfound wealth and the string of various invaders who have occupied Georgia.

Still hanging out with the Austrian and the American, we decided to get dinner and drinks:

I understand now why Georgian food is so common in Russia – it’s deserving of the popularity. It’s unique, with its own spices, flavours, preparations, and not to mention delicious. Georgians are intensely conservative and traditional – I was told that you don’t mess with two things: the church, and the food. I can hardly believe this is the first time I’ve eaten Georgian food, it should have restaurants worldwide!

Afterwards, we went for wine. The Austrian left early, citing tiredness, and the American and I stayed for ‘one more drink’. As is the way of the world, the night did not follow that plan… We were finishing our second ‘last drink’ when some loud Georgians at the next table asked where we were from – they were a group of lawyers and Polish students about to head out to ‘Tbilisi’s hottest club’. You can see where this is going…

The ‘club’ was actually a repurposed three-storey house, outfitted with trashy-chic décor and dangling red neon lights. All the furniture had been pushed to the walls to make way for a dancefloor, and we proceeded to drink and be merry. The club was a surprising mix of professionals, intellectuals, and plain ol’ partygoers. I remember meeting a Scottish/Indonesian personal trained named Kenny, and there being more lawyers than is appropriate. One man was dressed in a flowing red robe with shoulder-length black hair and a magnificent beard to match. “Hey Jesus!” I called out. He simply smiled benevolently and raised his glass of water – or was it wine? The night grows hazy about here, and all I know is that I got back to the hostel very late…

Nursing my head and cursing my alarm, we were up early (9:15am) to visit David Gareji, a monastery cut into the rock on the border with Azerbaijan. We passed sun-baked vineyards, mountainous valleys, and drizzly low forests before finally emerging into open plains with gentle, rolling hills.

We climbed the ridge to get a view into Azerbaijan. After a sweaty climb, we sat in awe looking out at the landscape surrounding us. One word jumped to mind on reaching the crest of the rocky hill: biblical. The hills and valleys seemed boisterous, jostling for what little real estate the vast plains had not swallowed up. The great cliffs caused by plate movements long past loomed equally over the two nations. Above, intermittent clouds threw a patchwork of sunlight on the landscape while several isolated grey monoliths bucketed rain and shot down lightning. On the narrow crest of our hill was a queen’s garden worth of wildflowers, and up ahead two AK-47-wielding guards wandered around, smoking cigarettes. 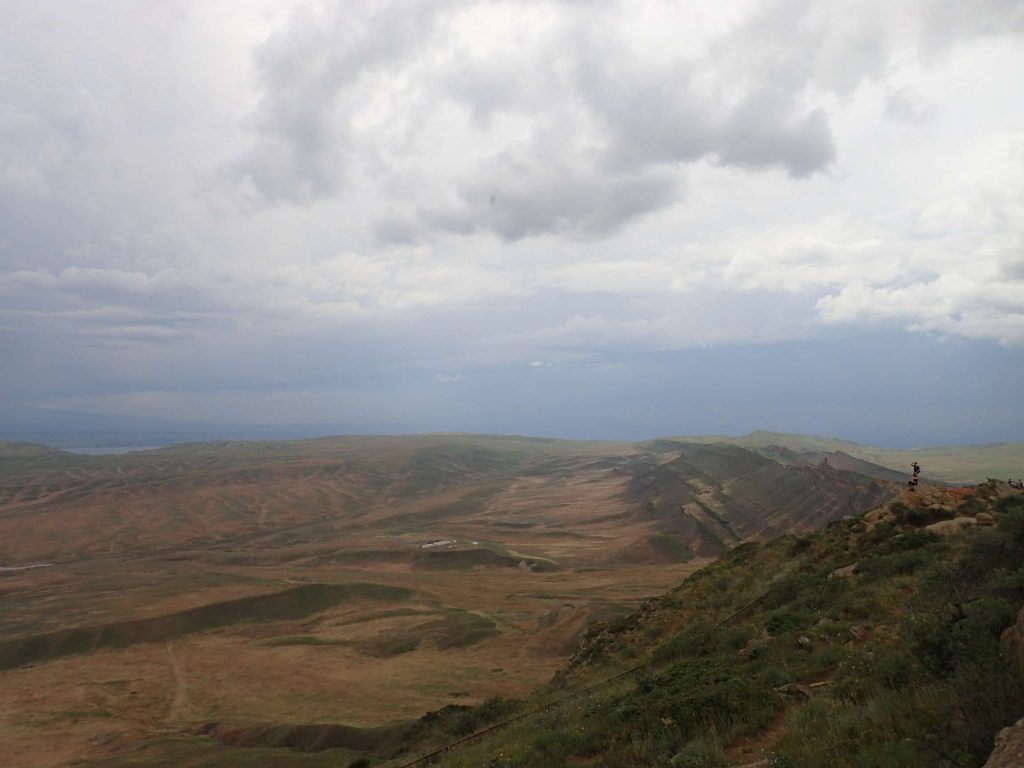 This was one of those ‘wow’ places. You walk along the ridge and forget the scenery around you, then each time you look up you’re gobsmacked once more.

Back in the capital, I made a spur-of-the-moment decision to take the night train to Zugdidi then on to Mestia with the Austrian, the American, and an English guy we had met at David Gareji. Mestia is the place in all the tourism brochures, a postcard-perfect valley framed by icy peaks and rapidly flowing rivers. The night train was fine – amusingly novel to all the others, but I was at home after having spent countless hours in such compartments. Plus, only 18 lari for a sleeper.

Mestia was jaw-droppingly beautiful. Studded around the valley are these stone towers where the villagers would apparently retreat and hold out in times of attack. It’s one of the only areas of Georgia that’s never been properly invaded, and I can see why. You have to follow a remote mountain road for about 100km before coming to this compact valley surrounded by mountains – and then all your enemies are holed up in these stone towers! Ancient relics have supposedly been stored here for protection when times are dire.

We climbed one of the towers – a surprisingly precarious affair with wooden stick ladders inside – and beheld the view from the top. The wooden roof of the stone tower creaked alarmingly underfoot…

We finished the day with wine and a screening of The Darjeeling Limited, courtesy of my hard drive and laptop. The next day was uneventful – while the Austrian went horseback riding, we three guys tried to find some ruins that were said to be on a certain hill. We ended up on a fruitless but not unpleasant ramble through some forest and along some road, rewarded instead by soaked shoes. Flip-flops for the next few days!

For dinner was another Georgian specialty: kubdari. This time an ethnic dish of the Svan people, inhabiting Svaneti (with Mestia being the capital), it’s basically meat wrapped in bread dough and allowed to rise before being baked. The result? A glorious Frankenstein-sandwich-thing of freshly-baked bread with meat filling, the juices running out and onto your chin upon consumption. Would strongly recommend.

We finished the night by finishing our wine (did I mention it was an 18-lari, 3-litre bottle?) and watching Reservoir Dogs.

Next time: Batumi, Georgia’s Las Vegas, hitchhiking our way into Turkey, and the city of apricots in the middle of Anatolia.

This entry was posted in Daily, Georgia