I spent the next three days in Moscow investigating various parks and museums – along with figuring out where to go next. Gorky park is Moscow’s version of Central Park; a good way to spend an afternoon, doing some reading as you watch skaters and rollerbladers zooming about. The park is excellently maintained with pagodas, museums, and fountains scattered throughout.

At the risk of sounding like a retiree, Moscow’s parks are actually worth a visit – not only for the greenery and ‘park stuff’, but the various monuments and fountains, and to gape at the work put in to maintaining these massive areas.

During his rule, Stalin fancied Moscow as a sort of modern-day Rome – Rome has seven hills surrounding it, so Stalin built the ‘seven sisters’: seven enormous buildings dotted around Moscow. This is one of them: 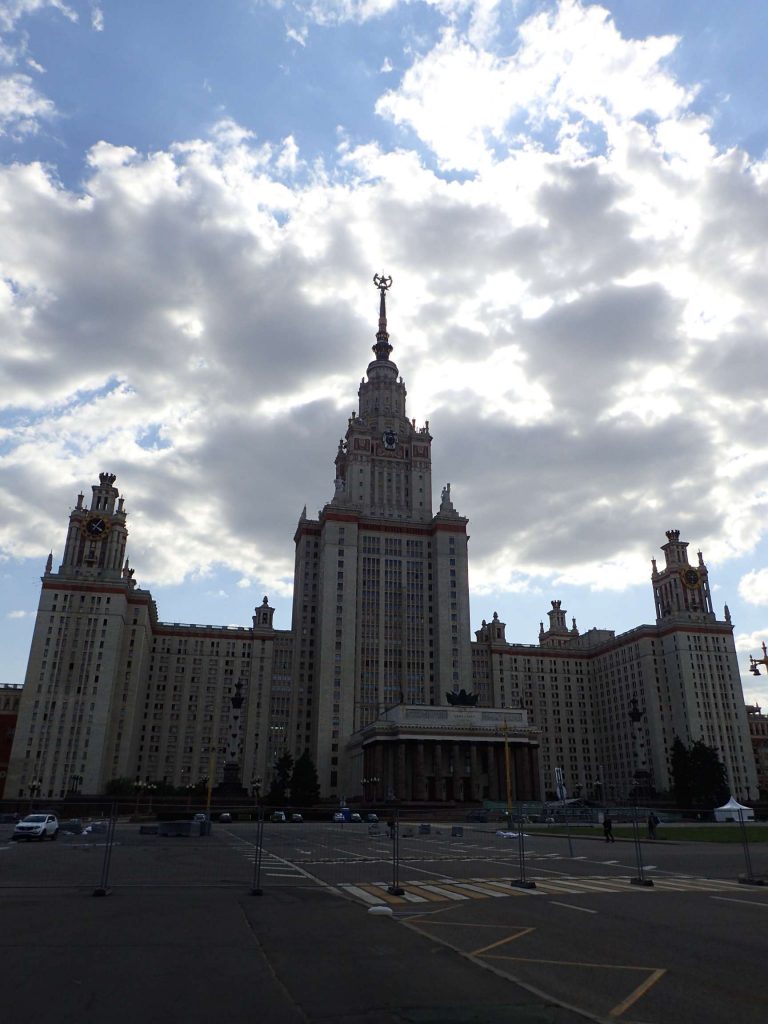 The Pushkin Museum of Fine Arts is right in the center of Moscow, and houses and overwhelming collection of art from around Europe and the world – it’s the Louvre of Russia. If you want a focus on Russian art, check out the Tverskoy gallery; lots of Russian paintings there. I had the good fortune of thumbing through the enormous Pushkin guidebook at the hostel before coming here, so I found myself recognising important pieces and little facts.

Spending a few hours here is a great way to get ‘museumed out’ and gain an inflated sense of intellectualism.

After walking around a bit, I realised that copyright laws in Russia are more of a concept than an enforced reality. I spotted a Krusty Krab restaurant (Spongebob), and even a ‘Los Pollos Bandidos’ place which served a ‘Breaking Bad special’. The chocolate powder was sprinkled on top of the coffee in an image of Walter White’s face.

The ГУМ (“Goom”) is a mall in Moscow which is at once amazingly over-the-top, hideously expensive, and the place to be seen among the upper echelons of Moscow. Situated inside the Red Square, it’s full of uniformed ice cream vendors (whose ice cream is supposedly the best in Russia – I believe it), fountains, and piped era-appropriate music. In the overpriced cafes and restaurants, elegant ladies of the upper class nibble salad while well-fed men conduct business into phones. I counted three separate caviar bars, each surprisingly full. I wonder if that’s a common business lunch around here… The whole thing feels a bit like Harrod’s in London – great fun to walk around in, even if you’re not going to buy anything!

In the end, I spent too long in Moscow. I had a good time, but towards the end I felt like I was just dawdling, spending too much money on things that weren’t worth it. I mean, I was paying a fair price for my hostel, only I couldn’t stop thinking that it should be 30-50% cheaper outside of Moscow – especially in Turkey. I therefore booked the train from Moscow to Vladikavkaz, a city just 30km from the border with Georgia.

The Moscow – Vladikavkaz train was mostly third class. In other words, mostly locals. This time, my carriage-mates were two Balkan brothers heading home to see their parents, a 10-year-old girl, and her man-of-few-words father. The older yet smaller (and balder) brother was tied with the little girl for best English, so once again Google translate offline mode came in handy. I had the upper bed parallel to the window (the cheapest one).

Despite my already having had dinner, the Balkans insisted I eat with them – but not before inviting me to their parents’ house. At this point I had known them for all of ninety minutes. I had heard these were hospitable people, but this was unbelievable. At this rate, I’m going to have to roll to Denmark! Dinner was proudly cooked by the same older brother (Russian name Alexander, Turkish name Shevket) and was delicious. He works for Megaron, a retail construction multinational, as chief IT guy for their Israel department (he was dismissive, apparently it’s quite small). He struck me as a cross between George Constanza from Friends and (for the Australians here) that Greek guy from the RAA ads who’s always complaining about his insurance. The brothers have roots around the Turkish-Georgian border – present-day Meskheti (Meхетуя) province – where they can trace their line back to the year 1200. As a result they can speak Turkish along with Georgian and Russian, and they barrelled over with laughter when I busted out the extent of my Turkish: “Güle-güle, coçuk!” (‘Goodbye, child!’) 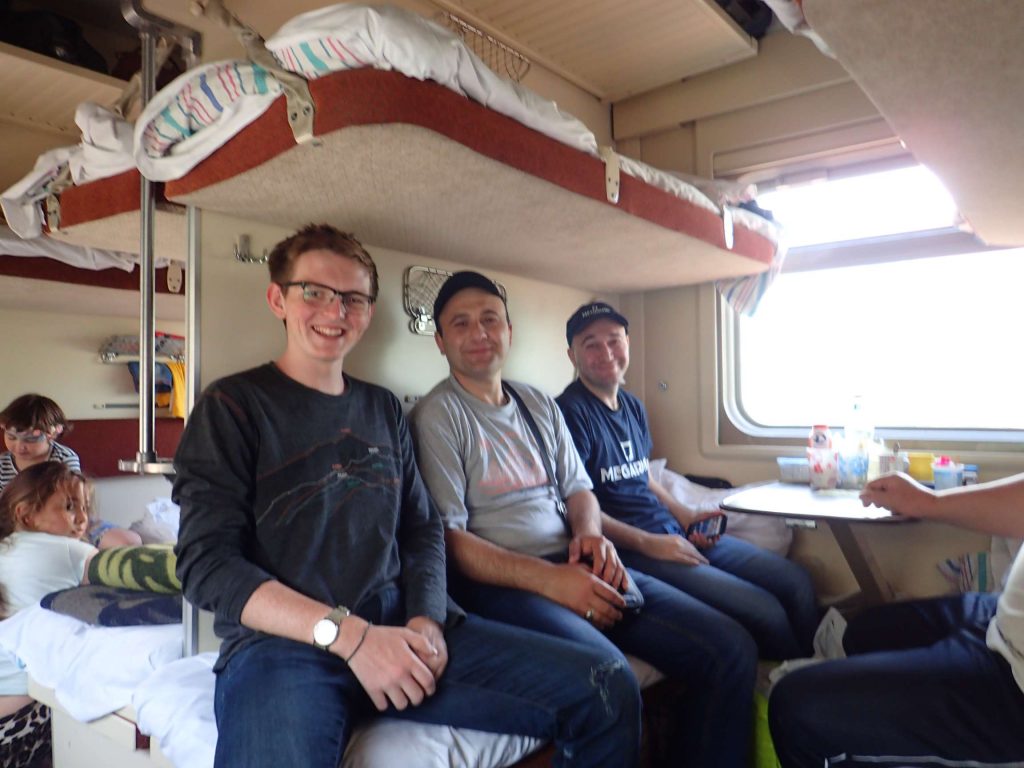 These two brothers were just amazing – I can’t quite put in to words how friendly they were, impressing on me food after drink after food. There was a soft drink called ‘Targhon’ (ТАРХУН) distilled from a mint-like plant native to Vladikavkaz which was particularly good. Via Google translate, they stressed “do not hesitate” with regards to eating their food. 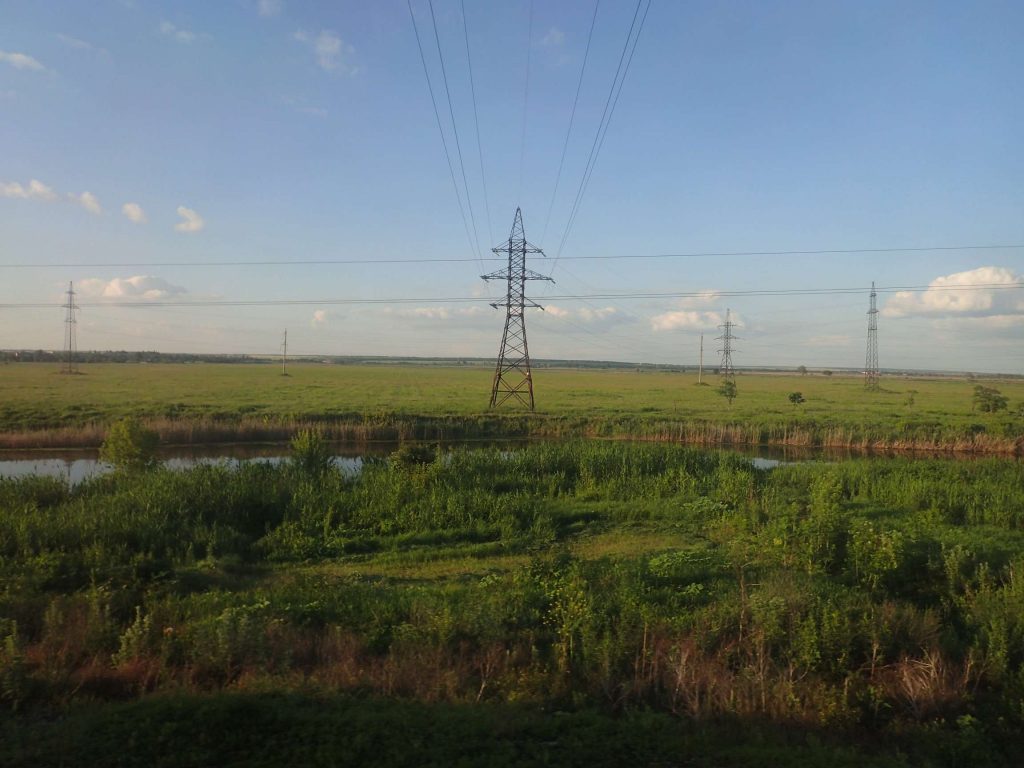 Next morning, I had planned on having an – albeit delicious – pauper’s breakfast of bread and cheese, but apparently these guys had other ideas. The following morning they again insisted I eat with them and reiterated their offer of me staying with them. I hadn’t been sure about it last night, but now I think I will do it. They rolled out olives, feta cheese, homemade bread, kielbasa (processed Russian salami), tea, soft-boiled eggs, and the juiciest tomatoes I’ve ever eaten. After the meal (‘the stuffing’) Shevket asked for my phone and typed out something to the effect of “It will make us very happy if you stay with us”. How could I refuse?! (Not that I wanted to, at this point!) They live just two or three stops before mine, too, so it should be simple to hitch-hike into Georgia from there.

At one point he even offered to let me stay for “many days” and drive me around the Caucasus with his cousins, to hot springs, waterfalls, mountains. This is just ridiculous.

Around noon, the previously-mute father of the young girl began to talk to my new Balkan friends… and talk… and talk… I get the feeling he’s like a rolling stone when he gets going (I doubt he gathers any moss, either!). He was a heavy-set man, with ponderous forearms and a jutting chin. In his mouth were the glints of several gold teeth. I noticed two faded letters shakily tattooed on his arm; I think Shevket mentioned he’s an ex-convict. I wonder what he was in for… probably not excessive cake decorating. Knowing Russia, you could probably get thrown in prison for baking an anti-Putin cake! Still, the guy was incredibly friendly in a gruff kind of way. He would always offer me food and drink, despite me being incapacitated from overeating for most of the journey.

Shevket’s brother spoke even less English than the carriage average, but he made up for it with a great sense of humour and a devilish smile – he’s like the uncle you always look forward to seeing at family gatherings. At each stop he would be practically bouncing off the train to guiltily suck down another cigarette; his brother disapproving. He proudly showed me photographs of him at work as a security guard in Moscow, followed by his wife and kids.

Despite the provodnik telling everyone not to drink, we decided to have a sneaky beer in our tea mugs (Shevket’s reasoning that it would look like tea). Following Murphy’s Law, we had hardly had the second sip when two burly police officers grumbled past. They stopped, and it got tense as they asked Shevket what was in the mugs. He answered tea. There was some measured conversation. Then they turned and asked me – I just shrugged and used half of my Russian in one sentence: “Ya niet Ruski” – ‘I’m not Russian’. I showed them my passport, I don’t think they could believe what they were seeing – muttering to each other in Russian and examining all my visa stamps. “An Australian? Alone? Here?!” I heard ‘Abkhazia’ mentioned several times – about 15% of Georgia’s territory which Russia has.. er, ‘claimed’, much to the despair of Georgia. It’s also completely closed to foreigners. I half expected one to pull out his phone and snap a picture of my passport! After a few more tense seconds they had us empty the ‘tea’ from our mugs and lumbered on. Shevket had the foresight to stow the beer bottle under the table. Oh, yeah, you can buy 2L plastic bulk beer bottles here – that’s innovation! He told me afterwards they had wanted a 30 USD (2000 ruble) on the spot ‘fine’ (bribe), and only my being there had stopped them. I suspect they usually extract a ‘fine’ for what is supposed to be just the smallest of small offences. Maybe I can repay these guys for their hospitality by stopping corrupt cops… incidentally, that’s an underwhelming superpower.

The next morning, I woke up – at Vladikavkaz! The brothers, the father, and the daughter were gone. I still wonder what exactly happened, I think the brothers didn’t understand that I was accepting – maybe they thought I was just saying ‘yes’ and acknowledging their offer? Or maybe that’s just me rationalizing my failures… Oh well, I had a great time meeting them on the train either way. After a miniature adventure navigating Vladikavkaz public transport, I found myself at the Georgian border.

Next time: mountains, dumplings, and wine in Georgia!

This entry was posted in Daily, Russia