The train ride from Irkutsk to Krasnoyarsk, my first leg in 3rd class, was uneventful. Platzkartny, as it’s known in Russian, is 4-berth open compartments with two beds above the opposite window. It’s comfortable enough, and exclusively Russians. The carriage is almost empty the whole time; I’m alone in my 6-bed ‘section’. Each carriage has a ‘provodnik’ or two – the ‘conductor’ of a carriage who cleans, sells food and drink, and generally makes sure things are working and orderly. Tip these guys and they’ll make sure you’re well taken care of. Each carriage also features a samovar, a coal-fired endless boiling water dispenser that is the lifeblood of carriage cuisine. More on carriage life in my next post, when I go crazy with a 61-hour leg to Moscow. 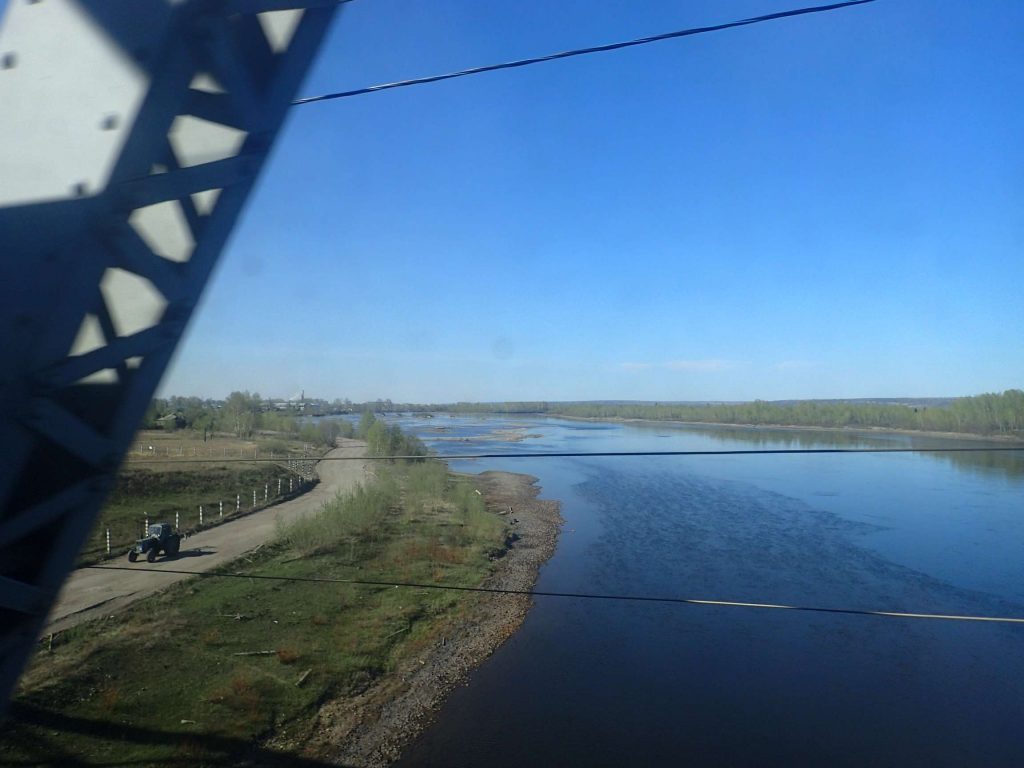 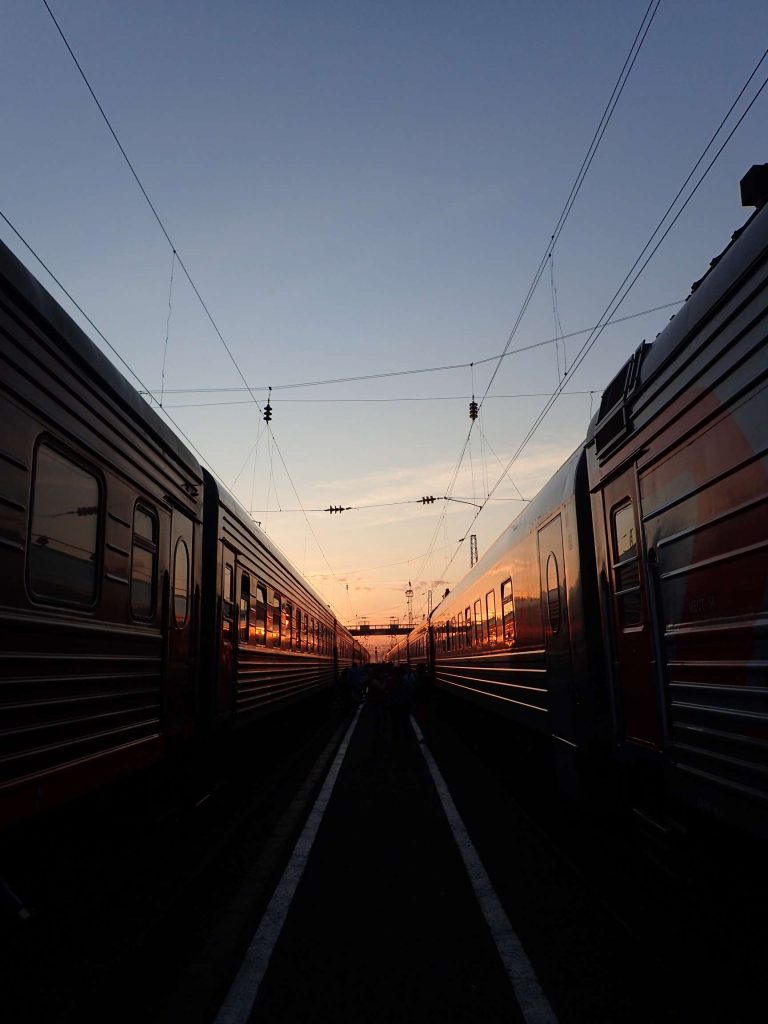 At one of the stops I saw something so unexpected it prompted me to snap one of those ‘please-don’t-notice-me-taking-this-picture’ pictures – it was just a Russian wheelchair, but apparently in Russia they take ‘wheelchair’ literally…

Arriving in Krasnoyarsk at 6am was a dreary affair. It was drizzling lightly and the sun was hidden behind some dark clouds. It was cold, wet and windy, the streets deserted and grey, everywhere shut. No free WiFi around the station (all required a Russian number), so I did the reasonable thing and jumped on the first public bus I could see. 22 rubles and 15 minutes later, I had just passed through the city and crossed over an enormous bridge so I got off. I wandered around a deserted sports complex and came across Krasnoyarsk’s TV and radio building. Having been involved in campus radio in Singapore, I seriously considered going in but though better of it (this becomes relevant later).

Krasnoyarsk is kind of like a cross between the Adelaide CBD and Manhattan. It’s situated between two rivers, the Angara and the Yenisey, with the city centre on the Manhattan-shaped island. The streets are laid out in a grid and the wide streets, parks, and building styles remind me of Adelaide. Both cities have almost identical populations, too. After a couple of hour more wandering, I found WiFi outside a supermarket and contacted the couchsurfing guy who had messaged me in Irkutsk, Mikhail. He gave me directions to his place and I made my way there.

Mikhail – insisting I call him Misha – welcomed me into his flat with uncanny hospitality, and he happily gave some recommendations on places to see around Krasnoyarsk. We made plans to meet up later at a ‘hipster food market’, and I was off to see a few museums. Interesting, but nothing remarkable or blog-worthy. Except, of course, mundane things like this:

The market was completely unexpected, both in its vibrancy and its scope. After a few days of rugged Siberia and weatherbeaten faces, to see ordinary Russians dressed up and out doing something, well, ordinary was a nice change. At some points you could be forgiven for thinking you were in Central Park or Hyde Park. I really didn’t expect Russia, much less Siberia, would have such cosmopolitan people and events. Of course, once again, I should have expected it – Russia is a massive cultural centre, and Siberia has been hugely influenced by the Decembrists – but I didn’t. It was interesting, too, to see the hallmarks of hipsters around the market. Everywhere I go – Singapore, Beijing, Krasnoyarsk – I see hipsters and hipster culture; it’s really a global trend.

The following morning I said goodbye to Misha and prepared to visit Stolby National Park – one of the main attractions of the region, supposedly with the best hiking in Siberia. Not, of course, before making an omelette:

Entering Stolby is pretty much a big uphill hike. Before you get to the park itself you need to walk about 7km through picturesque – if unremarkable – birch and pine forests.

After spending a few days in Russia, I’ve decided I really like the food here. It’s simple, honest fare with plenty of meat, bread, and perhaps most importantly, cheese! After spending a year in lactose-lacking (lacktose…?) Asia where almost all dairy is imported and expensive, it’s heavenly to have milk, sour cream, cheese or something of the sort with most meals. Wandering around supermarkets, there’s always a big selection of cheese, a wedge rarely more than $2. Their bread, too, is great – baked daily with loaves for around 25 rubles (50c), it’s easy to get a satisfying bread-and-cheese meal for less than a couple of bucks. Great train food! And then there are the dumplings, the blini (pancakes), the soups; the list goes on.

About halfway to the park, I started talking to a Russian woman named Anna. She offered to show me the best spots in Stolby – I gladly accepted! She told me she did PR and branding for a local escape room, and prior to that was a senior at the local radio station – the very same radio station I’d seen on arrival to Krasnoyarsk!

The views and rocks Anna showed me were nothing short of amazing, they made the substantial hike to reach them completely worth it. The park itself is famous for these large granite structures, I think there are over 30 in the park. They’re popular with climbers and the locals – there’s even an entire subculture of ‘Stolbyists’ who make the hike to the park nearly every day.

Anna generously offered to let me stay at her flat – I, having no plans, accepted. She said she could show me the escape room and the radio station the following day, which sounded fantastic. Since I had left Misha’s in the morning, I had been carrying my entire bag with me, rather than just my day pack. According to the fitness tracker Anna had been wearing, I walked 18.8km with my whole pack – good to know my bag (and myself!) can withstand a day’s hike! Anna cooked a fantastic soup, then we cooked blini – real Russian food!

The next day Anna showed me the escape room (Facebook page here https://www.facebook.com/eu4ria.ru) – really cool, nuclear-war-themed and fiendishly difficult – and the radio station. She was mobbed by old coworkers at the station and I was shown the studio.

Anna then recommended me some food places and I got some grocery shopping done before my marathon 61-hour train leg to Moscow. Anna’s planning to move to St Petersburg soon – the New York of Russia – both to be with her boyfriend and to pursue something more exciting in music and marketing and all things related. I wish her the best of luck – and thanks again for your hospitality, Anna!