This was it. The big one. Three nights, 61 hours, in third class. I arrived at the station, in front of me sat my new home/prison. It shone majestically in all its Soviet glory: a clunking, rattling metal rectangle inhabited by very bored-looking Russians, all smoking cigarettes on the platform.

As you walk in, the first thing you notice is the smell. It’s pretty much how you’d expect a metal box with almost no ventilation full of people (mostly men) with no access to a shower would smell. I, too, am guilty of some foot-smell (should probably have brought some more socks…), but my contribution is but a drop in the odour ocean.

I mean, it’s not inherently an *unpleasant* smell, but that depends on your tolerance for body odour.  It’s just… person-y. It smells like people. And armpit. Other than that, it’s fairly clean and you’re given fresh linen by the provodnik (cabin attendant). I was told by Anna that he’s my new best friend, and have heard from several sources that you should tip at the earliest opportunity for first-class service in a third-class carriage.

Compared to my Irkutsk – Krasnoyarsk leg, this train is full to the brim with Russians presumably heading to Moscow (you’d hope, considering this is the Moscow train). There’s a young teen opposite me and most likely his father above him, snoring loudly. So far, no one has spoken to me or even stared me down (unlike in China/Vietnam). It’s kind of nice to not be noticed, to just blend in – especially after a year sticking out like… well, like a ghostly white person in Asia. That does mean people assume you speak Russian, and I’m a continuous disappointment in that regard.

Once, a bus ticketing guy learned I was a foreigner and proudly introduced himself as Ankov from Kyrgyzstan. A high school girl overheard and came over to practice her English, talking at me until my stop. Russians (Russian waiters especially) can be quite aloof – no one smiles at each other on the street or says hi – but once you start talking they’re very friendly. That said, a good part of my experiences are probably because I’m not Russian.

Hopefully this provides at least some semblance of nutrition. Hope the cheese is good.

Sitting here waiting for the train to depart, the optimist in me wins out: if you think about it, it’s like a 3 day breakfast-in-bed marathon! You get to listen to music, read books, eat, drink, talk to strangers, all while the forests of Siberia roll past your windows. That’s right, windows. There are multiple. Luxury! Third class, schmird class. [Now that I’m in Moscow: oh, sweet summer child]

Well, crap. I seem to have managed to buy the two blandest cheeses in Russia. These are just terrible, it’s like cheese-textured Styrofoam. No, that’s giving Styrofoam too much credit – it, at least, tastes of plastic. These cheeses have simply a void of flavour. Thankfully, the Assorted Meat Loaf™ is packed full of flavour. Mm, porky/misc. A fact I’ve also apparently forgotten: bread, believe it or not, produces crumbs. As this is supposedly breakfast in bed for three days, that might present a little problem. A crumb-sized problem, shall we say.

A shirtless Russian bear of a man lumbers past, holding a comically small sky-blue teacup with a teabag hanging out of it. He has a bristling mustache that would make Stalin proud.

I hear a gentle rain from above me, like a gutter emptying on to a tin roof. I look up, it’s coming from the snoring father – he’s curled toward the wall. Oh. He’s pissing into a bottle.
…Fair enough, I suppose.

These sunsets take a ridiculously long amount of time. I guess that’s what comes from chasing the sun – and at this latitude, too. It’s been trying to set for the last three hours, but the last reds and oranges are still on the horizon. It’s just gone 11pm – 11pm Krasnoyarsk time, mind you – by the time I reach Moscow we will have passed four time zones, making it four hours earlier than it should be in Krasnoyarsk. 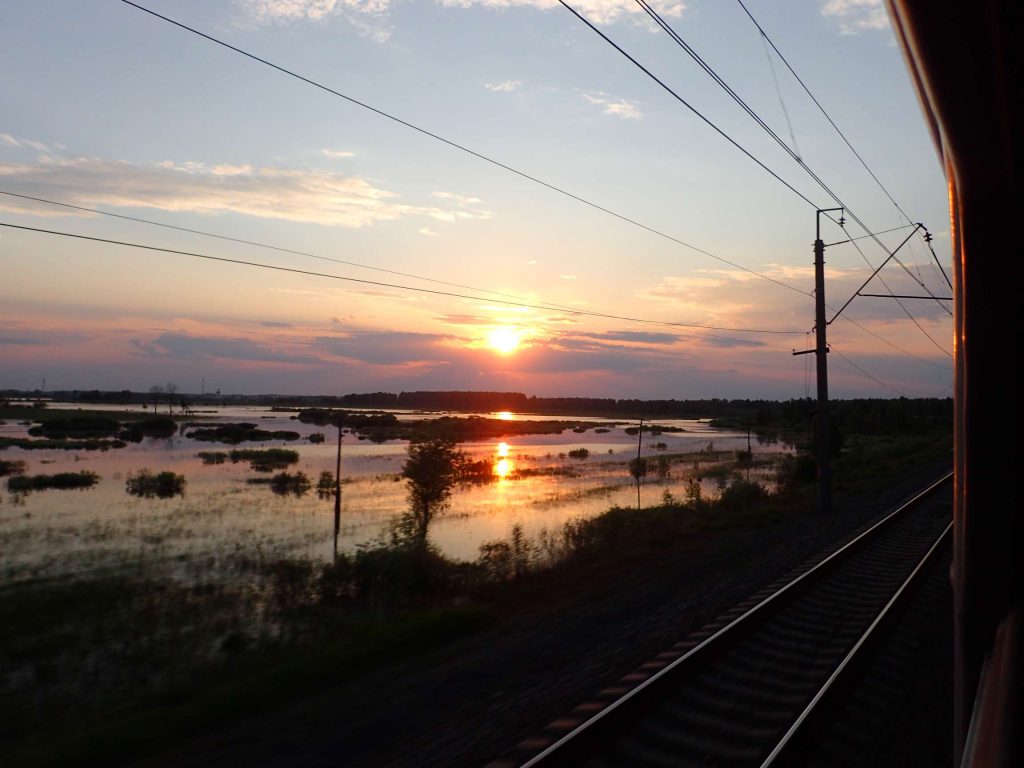 Almost since I knew I was going to Russia some seven months ago, it’s been at the back of my mind: learn Cyrillic, learn Cyrillic (the Russian letters). I made some vain attempts while in Singapore, mostly the most basic letters (e.g. in Russian, ‘H’ is ‘N’ and ‘P’ is ‘R’). Being in Mongolia was useful until I realised they had the same alphabet but a different language – I kept wondering why signs I would read said things like “Xhyarr” and “Rchkxyss”. Alright, those two are made-up, but you get the idea. After a long and convoluted history, and after passing through 6 iterations of script, the Mongols finally settled on Cyrillic around the 50s or 70s. It’s almost as if them being next to Communist Russia had something to do with it… Originally, Mongolian writing was pretty much vertical Arabic. Yeah. I’ll pass.

Anyway, being in Russia I can now slowly read signs which say things like “Salon” or “Restoran” – which is far more useful. The Russian language at least shares some similarities with other European languages. It’s quite gratifying to watch yourself get faster and faster at reading Cyrillic – it’s got all the fun of learning a new language, but none of the pain and suffering of regular assessment. 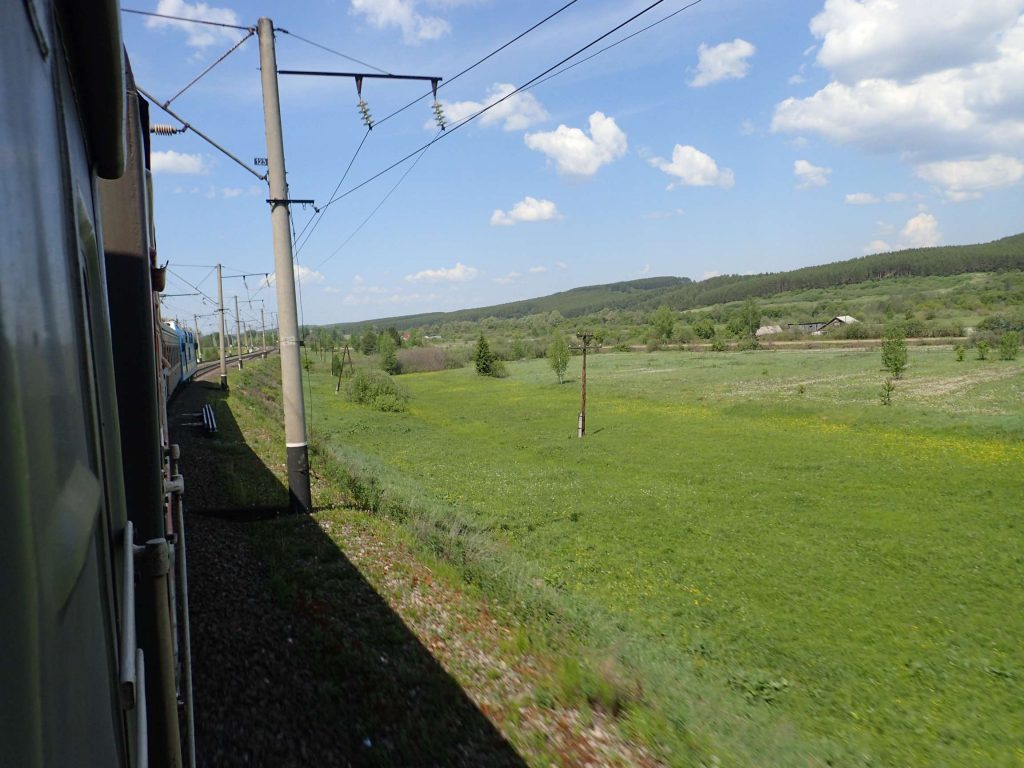 Much like Raskolnikov in Crime and Punishment, I have committed a crime – taking this train – and now I must suffer the ‘punishment’: attempting to read classical Russian literature. I have The Brothers Karamazov (I thought you should know that my phone wanted to autocorrect that to ‘The Brothers Kalamazoo’) and War and Peace – neither of which I’m going to finish. At least in the English translations, these books require constant mental effort to read, and they’re as dense as… a very dense object (the next Tolstoy right here). 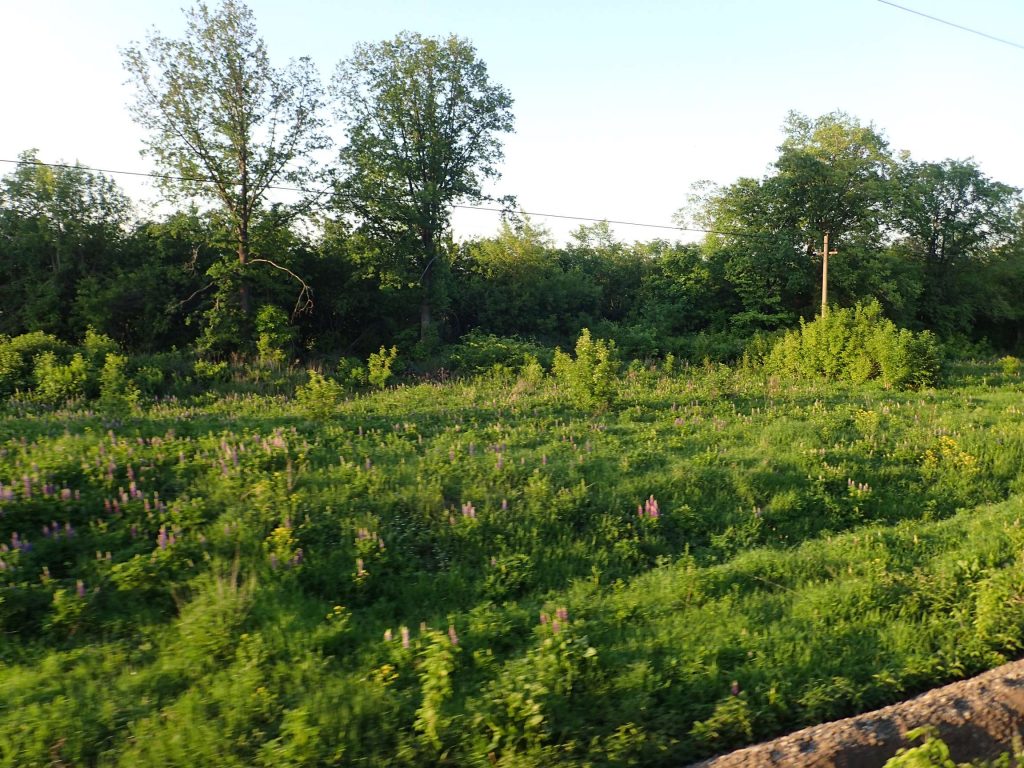 At one stop, I got the stations mixed up – I thought we had 21 minutes when we actually had 12. I got a funny feeling and hurried back to the train early. I wondered why there was nobody on the platform… then all the provodniks started yelling at me in Russian from the carriages and I dashed back to mine, apparently right on time – the train started moving a few seconds later. That could have ended badly.

Due to the nature of the Trans-Siberian, the act of putting things in your mouth – eating – is elevated to a ritual beyond what is normal. It breaks the monotony, to a point where you find yourself with a hunk of lavash bread in one hand and half a sausage in the other as a Russian infantryman grins at you encouragingly, or as you dip miniature pastry fish into a jar of homemade butter-cinnamon paste. Not unlike in prison, all sorts of culinary abominations at brought to life with access to unlimited free hot water and a carriage-worth of miscellaneous condiments. Ramen with mayonnaise and bread, tea and bread, bread and bread.

Remember that cup o’ soup I bought? When the babushka opposite me caught me staring at the label, she laughed and made a vigorous stirring motion. I did just that when I went to the samovar, and to my amazement it thickened into a paste almost reminiscent of a memory of mashed potatoes. It tasted surprisingly good – but I suspect that the barometer of ‘good food’ is altered whilst on the train.

On the last day, I woke up to find the carriage jammed full of military guys. As it turned out, most people would get off before Moscow – as far as I could tell I was the only person who went all the way from Krasnoyarsk to Moscow (‘stupid tourists‘). As soon as these guys found out I was Australian (or, more likely, just not Russian), they proudly showed off their military gear. They had been in the year-long mandatory Russian service, and insisted on posing for pictures (not that I minded): 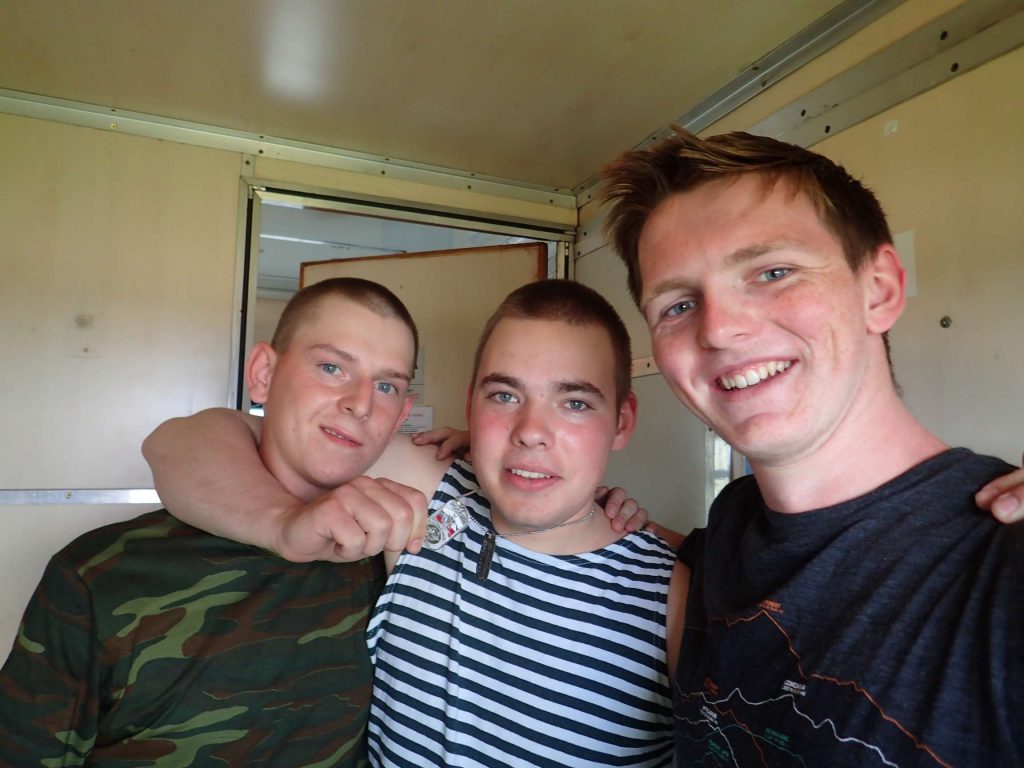 One particularly dangerous-looking guy turned out to be a Greco-Roman wrestling champion from the Ural Mountains. I don’t think he understood that talking more Russian at me wouldn’t make me understand it, but he was friendly. I would just smile and nod in response, with middling success. As he spoke, the babushka opposite me would occasionally burst out laughing. His name was Alex too, he was a sniper in the military, and showed off his patch which inexplicably featured a Batman-style symbol:

He insisted we get this picture of me wearing his medals and parade cap: 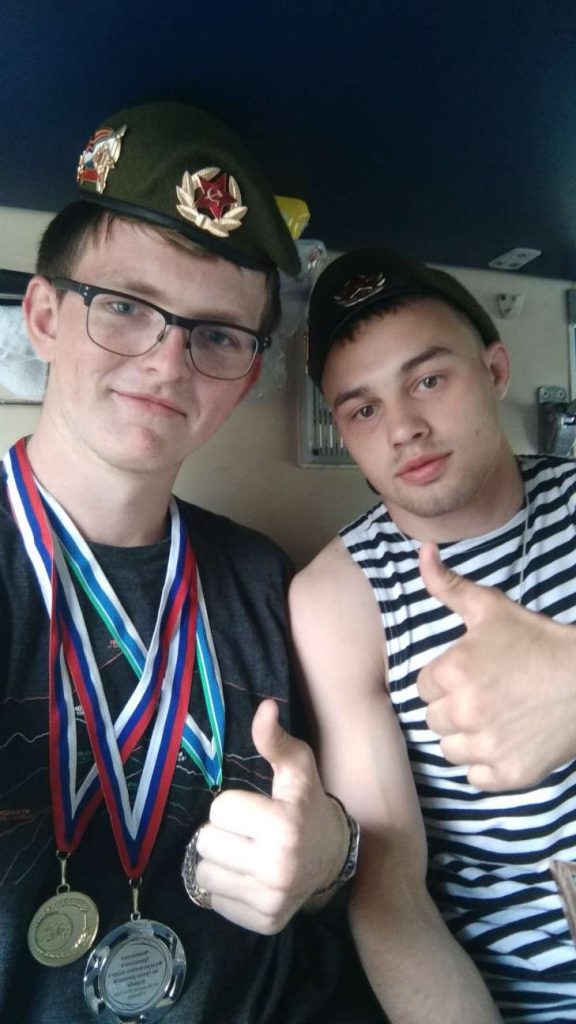 We farewelled once they reached their hometown of Kazan, and I returned, somewhat relieved, to my books and music.

Siberia was unexpectedly hot during the day – one station we got off at was 30 degrees! This, coupled with very little ventilation on the train, meant sauna-like temperatures during the day. Top tip: Go to the section between carriages where you can pull down the little window. I realised at the end of day 2 that I no longer noticed the smell…

Finally, the carriage was woken up at 3am in preparation for our 4:42am arrival into Moscow. About 30 minutes before arrival, the landscape transformed from Russian countryside to heavy industry, then slowly changing to Soviet residential. Sunrise is about 3:30am – it was surreal for it to be so early and so bright. As I walked out of the station, my jaw just dropped – it was like being in a different country.

I’m not in Asia any more… welcome to Moscow.